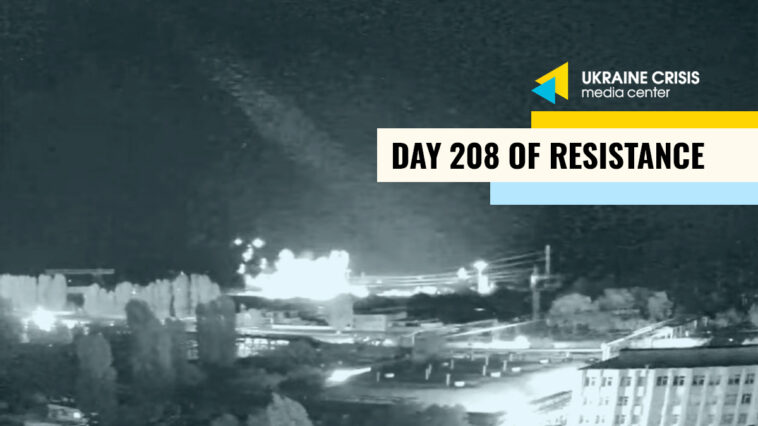 On the night of September 18 into September 19, the Russian forces carried out a missile strike that hit the industrial site of the Pivdennoukrainsk nuclear power plant in Mykolayiv region. The blast wave damaged the building of the plant, Ukraine’s nuclear energy agency Energoatom said. The agency released photos and a video of the strike.

One of the Russian missiles fell 300 meters from the plant’s reactors. The blast wave damaged the building of the nuclear power plant and shattered more than 100 windows. One of the hydraulic units of the Oleksandrivska hydropower plant, part of the Pivdennoukrainsk power grid, went off.

Three high-voltage transmission lines shut down. All three units of the Pivdennoukrainsk nuclear power plant operate normally. There were no casualties among the station personnel.

“Acts of nuclear terrorism carried out by the Russians threaten the whole world. They must be stopped to prevent a new disaster!” Energoatom said.

The authors of the appeal say they are convinced that “the residents of the ‘republic’ will support the call.”

A sham referendum cannot be organized “in a matter of a day,” the Donetsk militants said. It is too early to set the date, they added.

The calls are set against a tense backdrop of the Ukrainian counteroffensive. Russia declared that it had taken control of all of Luhansk region, yet, six months into the full-scale war, it did not achieve that. In the beginning of September, the Ukrainian Armed Forces went on the counteroffensive. They also recaptured some towns and villages in Donetsk region.

“Ukraine’s fire control of the crossings over Dnipro trapped the [Russian] units between [the positions of Ukraine’s] defense forces and the right bank.”

“They are offered surrender under international humanitarian law. They can also come back home if they find a way to,” Humenyuk said.

The Russian forces are demoralized and degraded, she proceeded. “They are truly demoralized and not motivated to stay on the axis. They saw what happened in the east. (…) It is less of a distance for them to lay down weapons and move forward to become prisoner swap material, than to move toward the border. Unlike in Kharkiv region, in the region of Kherson, the border with Russia is distant. There is also an obstacle on their way – the Dnipro River,” the spokesperson for Ukraine’s defense forces in the south said.

Ukrainian Zhytomyr Stands Up to the Russian war. Ukraine in Flames #192