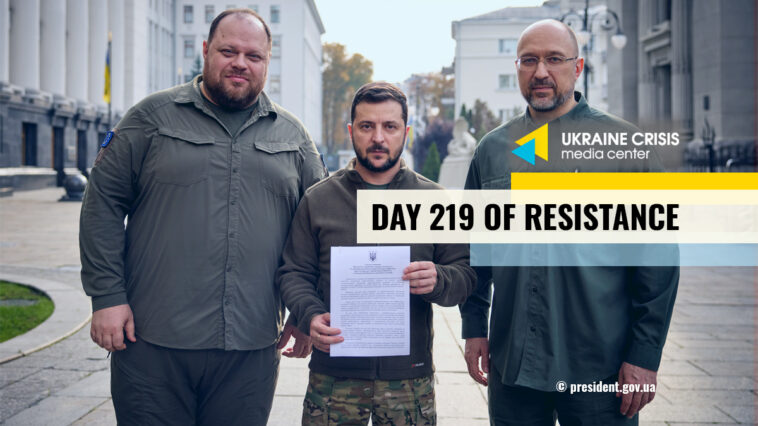 On Friday, September 30, Russia announced annexation of the territories it had seized in Ukraine’s four regions since 2014 and its full-scale invasion of Ukraine in February 2022.

At 3 p.m. local time, Moscow staged a public ceremony in the Kremlin to falsely proclaim the annexations. Russia said it “signed treaties to incorporate [the territories] into Russia”. The annexations are seen as legally null and void by Ukraine and the international community.

Russian members of parliament sat in the audience. Putin delivered another absurd speech full of historic inaccuracies, in which he also restated a list of complaints against the West.

The Russian troops do not have control of any of Ukraine’s four regions – Donetsk, Luhansk, Kherson, and Zaporizhzhia, parts of which Russia moved to annex.

On Friday, September 30, President Zelenskyi said Ukraine had formally asked NATO to fast-track its membership application to the alliance.

De facto, Ukraine has already made its way to NATO and proved compatibility with alliance standards, President Zelenskyi said in his address after a meeting of Ukraine’s National Security and Defense Council.

“De facto. Today, Ukraine is applying to make it de jure through a procedure consistent with our role to protect our entire community – an accelerated procedure,” Zelenskyi said, recalling Finland’s and Sweden’s accession to NATO.

While the talks on Ukraine’s accession to NATO will go on, Ukraine’s allies should implement the security guarantees fixed in the Kyiv security compact, Zelenskyi suggested.

It will climax in 2023, Valeriy Chaly, Chair of the Board of Ukraine Crisis Media Center, Ambassador Extraordinary and Plenipotentiary of Ukraine said in an interview with the Priamyi TV channel. Putin will gradually drop the “nuclear rhetoric” after Washington sent him clear signals that the response will be catastrophic for the Russian Federation, the diplomat said. Valeriy Chaly also spoke of the reasons for EU’s reluctance to supply offensive weapons, the impact of sanctions on Russia and the change in China’s position.

“The probability of using high-power nuclear ballistic missiles is now at a very low level. I would say it is close to zero. People should understand this. There is a probability of using weapons of mass destruction, but not so high. And in any case, we will know it. They can’t do it secretly. I think we can expect some kind of demonstration of force by Russia on its training ground, a test. But it is definitely not a threat directly for today, tomorrow, this week or month. There is no evidence that Russia is preparing to use nuclear weapons,” the diplomat said. Read the full interview transcript in English at the link.

Like any former empire, Russia uses symbolic power to expand its sphere of influence. Monuments, museums, and street names have long ceased to be just a way to honor Russian culture and history and turned into another instrument of colonialism. Both during the Russian empire and the Soviet periods, Russia used its cultural and historical figures to assert the power of the empire. All the monuments to Pushkin, Peter I, and Catherine II in Ukraine were intended to mark the territories of the metropolis. While Ukrainian artists and public figures were marginalized and stigmatized as “bourgeois nationalists”, the culture of Russian personalities was prosperous. After years of Russian cultural expansionism, Ukrainians take their own path of decolonization and re-evaluate their past while the shadow of “great Russian culture” continues to hang over the country. Ukraine in Flames #203 sheds light on Russian cultural imperialism and its dangerous role in the Russian-Ukrainian war.