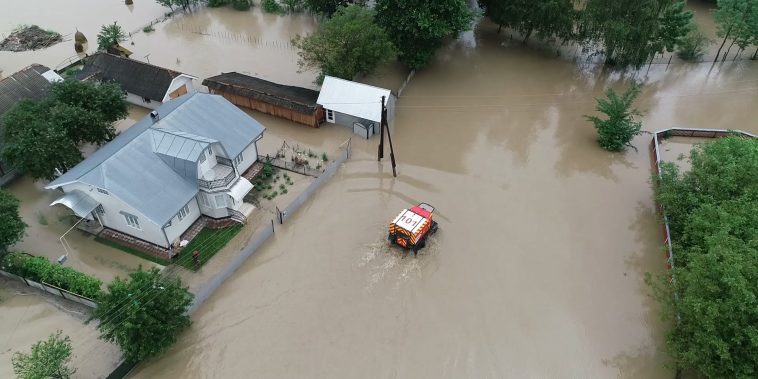 Last week Ukraine’s western lands got under water. The flood is one of the worst that Ukraine has experienced in the past years leaving thousands of houses, farmlands and roads flooded, dozens of bridges destroyed and having hundreds of people evacuated. In Ivano-Frankivsk region that suffered most, three people were killed. Prime Minister Denys Shmyhal said the situation in five regions was critical. UCMC looks at the situation in the Carpathians focusing on main reasons behind the disaster.

In 15 districts of Ivano-Frankivsk region, 4,596 houses were flooded, 427 km of roads got damaged, 90 bridges and 125 km of roads were destroyed. Besides, a hospital treating coronavirus patients was flooded too. The State Emergency Service said 320 persons were rescued and 300 evacuated.

According to the Prime Minister of Ukraine Denys Shmyhal, the 2020 flooding in the West exceeds the scale of the 2008 natural disaster. On June 25 the Cabinet of Ministers signed off on UAH 700 million (approx. USD 26 million) to address the impact of flooding.

What caused the disaster

First reason: higher-than-average rainfall. Some areas in the regions that suffered most had 50-60 per cent of monthly average precipitations fall in two days. On June 22-23, a weather station in Dolyna recorded 158 mm of rainfall (while the monthly average is 137 mm), in Yaremche – 157 mm (with 150 mm being the monthly average), in Ivano-Frankivsk – 81 mm of precipitation (against the 98 mm monthly average). The data was voiced by head of weather forecasts at the Hydrometereological Center of Ukraine Vladyslav Bilyk. Starting from late May, in the Carpathians, the rain was falling often. The soil was already saturated with water by June 20 when heavy rains occurred for several days.

Flooding is not new to the Carpathians, it also happened in the past without causing massive damage, economic losses and casualties.

Second reason: forest cutting. Dmytro Karabchuk, coordinator of Forest Watch at WWF-Ukraine explained that there is a difference if local mountain sites are converted to living areas, grazing lands or are left to growing of forests. It’s the forest that can hold up to half of the rain water, depending on the tree type.

There are several mechanisms involved. The total leaf area on various forest levels is bigger than the area of the ground beneath. It means that more water evaporates from leaves. Besides, water drops are cut into droplets that are taken by air flows elsewhere. Finally, plants absorb and hold part of the rainwater.

Clearly, if there is much precipitation, the water will reach the soil surface despite all “efforts” by the forest.

Third reason: lack of preparation. Key is the fact that people are not duly prepared for the natural disaster and sometimes further complicate the situation. An example of such risky behavior is having a house constructed too close to a river, in a floodplain.

Unprotected roads and dams requiring reconstruction are unable to stand against the natural disaster. At the same time, in the view of the region’s specifics, they need to meet respective quality standards and be duly maintained. At least weak areas are worth fortifying even temporarily, should the weather forecast warn of a flood.

Reaction of President Zelenskyi. On June 25, several days after heavy flooding started, President Volodymyr Zelenskyi visited Ivano-Frankivsk region. According to the news released by his press service a day earlier, the President “made an emergency working visit to Ivano-Frankivsk region”. He was supposed to visit the area damaged by flooding, meet the residents of a village affected by the disaster and hold a working meeting on addressing the impact of flooding in western Ukraine.

Ukraine turns to the EU, NATO for assistance. Ukraine’s Foreign Affairs Ministry appealed to partner states and international organizations asking for assistance to address the impacts of the natural disaster in western Ukraine, a respective statement by the Ministry reads.

Ukraine counts on partner support of the government’s efforts in protecting lives of Ukrainians, critical infrastructure and decreasing the negative impact of the disaster on economic activities.