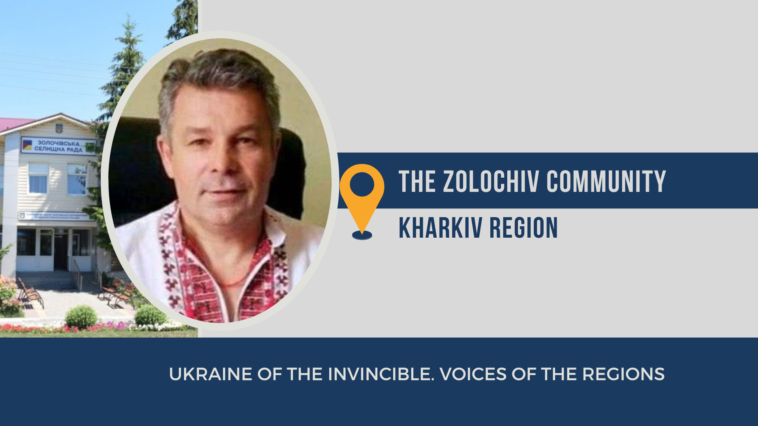 The Zolochiv community is typical for the Kharkiv region. A large number of settlements (73), in many of which only a few dozen people have remained, fertile land and proximity to the Russian border.

Before the war, the community had more than 30,000 people, and its budget with the transition to direct relations with the state was close to 200 million hryvnias. There was a gradual, although not rapid, development.

But everything stopped in a flash. “If it weren’t for the war” – we will often hear this phrase now.

Every community has something to be proud of. In Zolochiv it is the Hryhorii Skovoroda National Literary Memorial Museum. The village where the world-famous Ukrainian philosopher died was named Skovorodynivka. Last year, the museum carried out restoration works, everything was ready for the 300th anniversary of the genius’s birth, but on May 7, an enemy shell canceled those plans.

The war crossed out everything. Viktor Kovalenko, the town head, says about the ruined lives, damaged buildings and infrastructure:

“Over 50 people have died and 74 have been wounded in our community. Over 800 private houses have been destroyed or damaged. Among social infrastructure facilities – kindergartens, a school, an outpatient clinic, a hospital, a house of culture. It’s very hard for our people to bear it.”

“Last night, a rocket hit an apartment building and it was torn apart. We’ve been cleaning the rubble all day since this morning. We have three dead. Today we will bury them,” says the head, and adds that 10 minutes ago he learned about the death of a teacher. “They are defenseless civilians. The day before yesterday, our volunteers evacuated two families from the village of Udy, where only 30 people remained out of 1,200 inhabitants. As soon as they left, shells landed in the village again. Three women were buried.”

In the Kharkiv region, only two rural communities were not occupied, one of them is Zolochiv. And this despite the fact that it has a 55-kilometer border with Russia. There are even villages that have always been called Russian. Who could have imagined what would happen in February 2022.

“These people are for Ukraine,” Kovalenko emphasizes. “After all, they saw what “gift” Russia had prepared for us. And people are not only against Russia’s military and the authorities, but also against those who allowed this to happen, did not support us, and did not go out to rallies.”

It may happen that some remote villages will cease existing altogether. Even in peacetime, one had 9 peasants, the other had 4.

My interlocutor is a strong advocate of decentralization. He believes that the way to the European space is impossible without this extremely important tool. However, in the current conditions, communities have taken on a heavy burden. The budget is tight. Agricultural enterprises are ruined, equipment is mutilated. Many areas have not been seeded. And no one is sure that they will be able to harvest what they have sown.

Why then does the Zolochiv community not surrender? What helps it to survive? “Our unity,” says its head. In one of his addresses to community residents in the first days of Russian aggression, he said: “Thanks to the joint daily efforts of starostas, volunteers, doctors, essential services, street committees, and public utilities, we can live and work, look ahead with optimism. Electricians are on 24-hour duty, maintaining the energy front and restoring comfort in our institutions and homes. Their work is so important that we aren’t tired of showing our appreciation to them every day.”

People have united. They understood it would be easier that way.

Volunteering has become massive. Food kits have recently been delivered from the Zolochiv community of the Lviv region. With the help of the Unity group volunteers, starostas, and public activists this humanitarian aid has been distributed and delivered to the starosta districts. People stock up on cereals, canned goods, pâtés, and canned vegetables. Besides, benefactors have provided sweets for kids and hygiene products both for children and adults. A total of 980 people have received kits.

“Our compatriots do not seek to become known for their good deeds and charity, they simply help people in need every day. The circle of benefactors expands; people who want to be useful to their compatriots join in,” Iryna Borokh says in this regard.

Meanwhile, the threat to people’s lives does not disappear. Viktor Kovalenko points to the place of the last explosion: “152 millimeters, which means that either a howitzer or self-propelled artillery was used.” As an Afghan war veteran, he is well versed in this. He is proud of our soldiers, their courage, love for their native land. He pays due honor and respect to them.

“My opinion as an ordinary Ukrainian and a person who took part in hostilities in Afghanistan is that we need a strong, prosperous state that has a powerful army rather than feeds a foreign army,” the Zolochiv community head says.

Hryhorii Skovoroda said, “There is nothing more dangerous than an insidious enemy.” Perhaps, he would add today – Especially when he is a few tens of kilometers from you.

The outstanding philosopher lives in the hearts of inhabitants of the surrounding villages even today.

“In the garden near the destroyed manor, fruit trees are blooming – life goes on,” Svitlana Danylko-Kurchenko shares her impressions. “And with their lush bloom, they seem to remind once again: the greatest value in life is freedom. As Hryhorii Skovoroda assured, it enables a person to know and create himself. We have hope and faith in the soonest possible restoration of the museum and its exposition, because only love unites, builds, creates, whereas hostility destroys.”