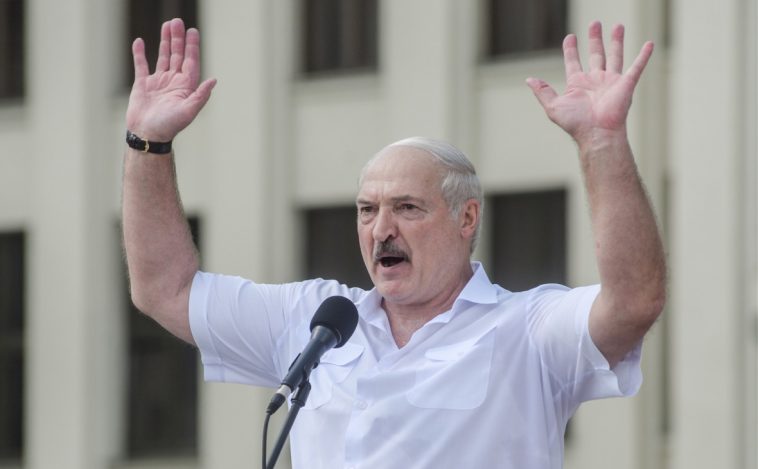 As Alyaksandr Lukashenka finds himself under the growing pressure of protests that resulted in a wave of police violence and 5 confirmed deaths, it becomes increasingly difficult to maintain his grip on power. Massive strikes at country’s most important industrial objects and even state television – major mouthpiece of government propaganda – contribute to regime deterioration no less than the largest protest in history of Belarus. Lukashenka, however, is unwilling to step back and his messaging is more than explicit: on August 17 he announced

We’ve had election. You will not have another one unless you kill me.

And as the growing number of European states rejects the results of rigged vote, Lukashenka’s dedication to remain the ruler of Belarus pushes him even closer to a neighboring dictatorship – Russia.

Kremlin has openly stated its readiness to “facilitate solving the problems” in the republic, citing its obligations under the Union State treaty and also referring to the Collective Security Treaty Organization (CSTO) both states are members of. These claims imply Moscow’s willingness to use force – or at the very least the declaration of this willingness. While many consider Russian invasion camouflaged as “brotherly assistance” unlikely due to its potential cost, it remains a valid option for Putin. Annexation of Crimea was also deemed unlikely in 2014, but Kremlin decided its imperial ambitions and dwindling support for Putin were more important than potential response from the international community.

Sanctions, while necessary but arguably not sufficient, did not do enough to discourage Russian regime from its aggressive policy. Meanwhile, Putin’s approval numbers that have been consistently decreasing since 2017 hit a new low in 2020 – only 23% of Russians trust him. Moreover, while the costs of hybrid invasion would be very painful against the backdrop of economic crisis, the context of bilateral relations balances them to a certain degree. Lukashenka might have been reluctant to pursue in-depth integration under the Union State treaty and has made a number of timid attempts to pursue relations with the West as a counterbalance to Russia, but the formalities of Union remain valid and can be used by Kremlin as an excuse. So does the CSTO factor. Designed as Russia-led opposition to NATO, it has never been an active contributor to the regional security, but back in 2009 Moscow ratified the Protocol on the mechanism for providing military-technical assistance to the member-states.

Lukashenka’s accusations of foreign meddling, eagerly echoed by Russian state-controlled television, and his recent rhetoric blaming NATO for the troop build-up next to Belarusian borders (which the Alliance has denied) pave wave for potential military assistance from Moscow. Increasing labeling of protesters as radical nationalists also contributes to getting the audience ready for such turn of events. Russian invasion is still an option – and it might not be Putin’s first choice, but it should not be dismissed as impossible.

The costs, however, would indeed be high, so it should be considered a last resort. Kremlin has other ways not to let Belarus out of its grip. Putin’s regime cannot tolerate pro-democracy movements in the neighboring states, since they might give Russian population the wrong idea, so it very well may resort to assisting Lukashenka indirectly. Such assistance may include sending Russian law enforcement – not military – without insignia to Belarus to support the local police, which becomes increasingly discouraged to suppress the civic unrest. Majority of violence ceased approximately 5 days ago and in some cases law enforcement expressed solidarity with the protesters. Considering that civic unrest was not localized, there was little room for regime to maneuver and redeploy the units to areas where people are unfamiliar to the police and it is easier to violently suppress them. Should Lukashenka make another attempt to disperse the protests, he would need back-up.

It is even more likely to include a non-muscle part: boosting propaganda, consultations on subverting and discrediting the protests. Ministry of Interior has already attempted to reassure the public that misuse of police power will be investigated and Lukashenka even claimed that he might consider the possibility of new elections, provided that there is a referendum on constitutional amendments in Belarus. Given the history of his regime, neither promise is likely to be implemented fully and transparently, but they are a way to dilute public dissatisfaction and discourage the least motivated groups from further supporting the protests. Additionally, a pro-government rally was organized approximately a week after the protests started – reportedly, a part of participants was forced to come under the threat of losing their jobs. There is no evidence that these or any other ideas were suggested by the Russian political technologists – although pro-Russian politicians in other states often involve them. Nevertheless, similar assistance is to be expected as it is the least costly way for Kremlin to influence the situation.

Another reason why Moscow might be reluctant to throw its full force behind Lukashenka is that he has not been the most reliable partner to Russia in the past. There were a number of disputes between Minsk and Moscow on gas issues, Lukashenka has applied contradictory rhetoric on integration with Russia from calling it a “brotherly nation” to claims that if Union State diminishes Belarusian sovereignty there is no need for it. Most recent tensions were marked by the arrest of PMC “Wagner” group representatives, who were accused of being sent to destabilize the situation before the elections. Lukashenka has openly called onto Russian government to “stop lying” and even discussed the possibility to send the mercenaries to Ukraine, where they have been involved in hybrid aggression. This potential turn of events was not well liked in Kremlin – and despite the fact that “Wagner” members were returned to Russia, it is unlikely to forget Lukashenka’s initial reaction.

Moscow will go to excruciating lengths to keep Minsk in its orbit – but in doing so it might also bet on politicians other than Lukashenka, hoping for someone more cooperative. A number of opposition candidates have ties to Russia and have, on different occasions, taken political stances rather favored by Kremlin. Valery Tsapkala fled from Belarus to Russia (and has previously called Russian aggression against Ukraine a “civil war”) – although as of August 18 he and his family moved to Ukraine after being placed on a wanted list by Russian authorities themselves. Viktar Babaryka was a head of Belgazprom bank, where 49,8% of shares are held by Russian Gazprom. Sviatlana Tsikanouskaya, a de-facto opposition leader, stated Belarus needs to pursue friendly and neighborly relations with Russia, which was expected, – although she is not in favor of the Union State. Additionally, her husband Syarhey Tsikhanousky, who was initially a presidential candidate before his arrest, has supported Putin and illegally visited occupied Crimea. All of the above does not mean that opposition candidates in Belarus are pro-Russian. It means that Moscow has a lot of connections it might use to establish a favored relation with Belarus, even should Lukashenka be deposed.

Substantial economic dependence on Russia is an effective leverage tool to pressure the potential new government. Its efficiency would be combined with internal instability and inexperience of the prospective new elite, which would face a corrupt and ineffective Soviet-like system that has been for more than 25 years centered around one ruler. While misusing and facilitating local problems, Kremlin would make sure to portray them as the ultimate fiasco of changes in Belarus to prevent it from becoming an example of successful reforms as a result of popular uprising. It has already been spotted online, with many likely inauthentic accounts warning Belarusians not to repeat “mistakes of Ukrainian Maidan” that allegedly ruined the country.

It is, then, not a question of whether Kremlin will interfere in Belarus, but a question of how it will choose to do so. Given the strategic importance of its neighbor, Putin’s regime is going to apply one or several tools to prevent it from democratizing and moving closer to the West. Some of these scenarios may be implemented in a short-term perspective, others require more time. Belarus will face suppression from its neighbor regardless – international community should be ready to counter any of its manifestations, and do so consistently.