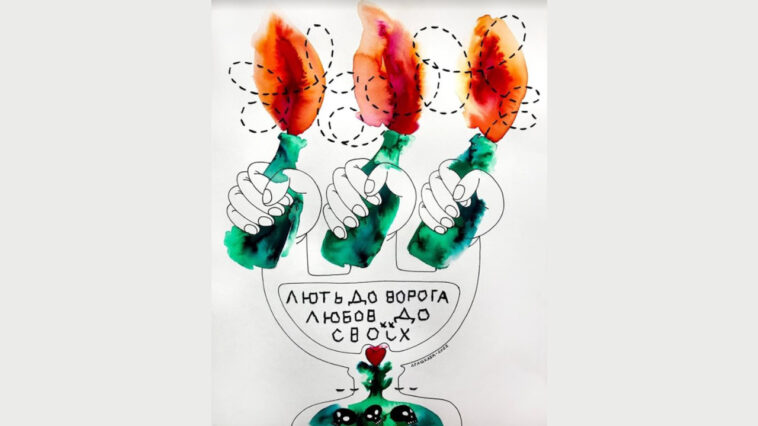 Olesya Drashkaba “Hate for the enemies – love for our own!”

The war in Ukraine has been going on for a month. The shortest and the longest month in the life of every Ukrainian is an accurate way to describe it. It was a terrifying month. We cried many times, froze with pain and horror on so many occasions, directed words of hate and anger towards the occupants again and again. Many Ukrainians lost their loved ones, families and their homes. Many are under siege or under constant fire.

Almost half of Ukrainian families were broken – men stayed in Ukraine while their wives and children became refugees in Western Ukraine or in Europe. More than 100 Ukrainian kids lost their lives. It was a very scary month. The shortest and the longest in life of each Ukrainian.

Nevertheless it was a month of big LOVE. For me personally this turned out to be the biggest turmoil and the biggest guarantee of our victory. Do you know what Ukrainians do most frequently? They hug. Those hugs seemed absolutely vital. Sometimes the hugs are virtual. Daily morning roundups  of all family members and friends with messages “how are you?” became a modern way of saying “I love you”.

Humanity revealed itself in numerous acts of irrational kindness. Somewhere a soldier is feeding a street dog from his ration, a volunteer is going through enormous boxes of humanitarian aid to find toys for kids at the border refugee camp. My friend send me a small package of tiny cakes and a hand cream with my favorite scent. A family receiving refugees had bought all of them matching pyjamas so they would feel at home.

Singing or making theatre performances in a bomb shelter is irrational but very important and humanistic. Ukrainians sing in basements, play instruments, pet cats and dogs, read out loud to others, play games. Street cafes are open again in Kyiv and are making amazing pictures on your coffee foam. They do it because that is the only way to feel a bit of normalcy and beauty in one’s life.

Do you know what else opened in Kyiv apart from the cafes? Some flower shops. Yes, one can buy flowers in Kyiv today, because it’s spring after all!

War is lots of pain and even more unity. There are no more homes where people wouldn’t know their neighbours. Giving your house keys to a neighbour with the words : “Take whatever you need” is a completely normal act. Taking care of someone’s pets or evacuating them is a frequent occurrence. Restaurants cook for the army and people who are alone. Women bake bread and give it out at the checkpoints.

Ukrainian army gets so much care and love from Ukrainians that territorial defence cannot comprehend that the lives of Russian soldiers are no longer important even to their own families.

Another way of love and support is humor and art. Numerous memes, posters, songs, videos, edits have been created by Ukrainians in just one month that it will be enough for three pavilions of the Venecian biennale. Today we often cry but we laugh even more frequently.

Laughter, love, care, beauty, spring – no putin or orcs, no “Grads” and “Iskanders” could possible take it away from the Ukrainian people. While russians are weeping, fight for sugar in shops and line their kids up in the shape of svastikas, Ukrainians prefer hugging, helping each other, laughing at the adventures of russians in Chornobayivka and thank our Army.

Therefore we have already won because humanity always has a bright future, whereas Zombies don’t. All we have to do now is to kick these useless occupants off our land!