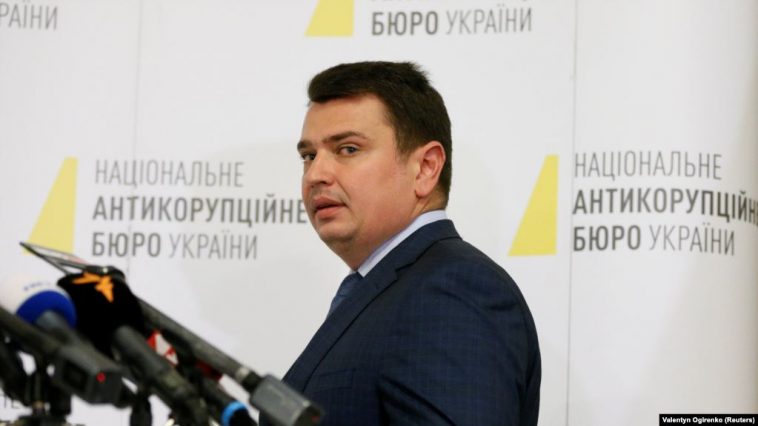 The decisions made by the Constitutional Court and the Parliament of Ukraine that compromise independence of the National Anti-Corruption Bureau and the Specialized Anti-Corruption Prosecutor’s Office, have alarmed the civil society and Ukraine’s Western partners. The steps that undermine the anti-corruption system, are also a solid motive to revoke Ukraine’s visa-free regime with the EU and cut off the financial assistance from the Western donors, local experts, Western politicians and Ukraine’s political opposition warn. UCMC takes a look at the developments around Ukraine’s anti-corruption agencies.

A legal war against the National Anti-Corruption Bureau?

On September 16, the Constitutional Court ruled unlawful the provisions of the law governing establishment of the National Anti-Corruption Bureau of Ukraine (NABU) and appointment of its director.

Having considered the submission by a group of 50 MPs, the upper chamber of the Constitutional Court made a decision that recognizes a number of provisions of the Law on the National Anti-Corruption Bureau “unconstitutional”. Particularly, according to the Court’s decision, the President of Ukraine (former President Poroshenko) had no powers that would allow him to establish NABU, nominate experts to the selection committee to choose the agency’s head, and appoint the candidate selected through the competition to the director’s post.

In other words, the Constitutional Court decided that President Poroshenko had committed the abuse of power by establishing NABU and appointing Artem Sytnyk its director.

To remind, on August 28, the Constitutional Court ruled unlawful the decree issued by President Poroshenko to appoint Artem Sytnyk the director of NABU. (Read also: “Anti-corruption efforts: a new attack on National Anti-Corruption Bureau of Ukraine”.)

What the legal contradiction around NABU is about? The fact that court ruled selected provisions of the law on NABU unconstitutional is quite an expected turn of events, preconditions for it were formed back when former authorities established anti-corruption agencies, explains Kateryna Ryzhenko, legal department chief at the Transparency International Ukraine.

“The key point of the decision made by the Constitutional Court concerns the presidential powers. The Constitution gives a long list of the President’s powers, but establishment of NABU is not one of them indeed. By its functions, the Bureau is an executive agency, so it should be logical that its composition and management is formed by the government. The danger is that further amendments to the law on NABU can become a Pandora’s box. There are risks that the MPs that would like to block anti-corruption efforts, will introduce other amendments as well,” the expert warns. “When NABU was being formed, this discrepancy was obvious, and it was discussed. Bach then, the President taking a role in forming of the agency was a political choice, it was a compromise. As seen today, it has become a shot in the foot. We don’t know how it will end. We need to be carefully watching the amendments made to the laws,” Ryzhenko said.

In fact, the actual decision creates no obstacles for the operation of the Bureau, as it only concerns the powers of the President, the presidential envoy to the Constitutional Court Fedir Venislavskyi commented after the Court issued the decision.

“Decisions of the Constitutional Court have no retrospective effect. When NABU was formed and its head was appointed, everything was within the law. The Bureau will continue operating as usual, until the law is amended and the new head is appointed,” Venislavskyi added in a comment to the public broadcaster “Suspilne”.

What does the director of NABU say? NABU director Artem Sytnyk mentioned legal threats in his interview to “Radio Liberty”. He explains the present situation around the Bureau by the fact that “not everyone is happy with an independent agency, including the individuals at the highest level.”

How long Sytnyk will stay in office as NABU’s director, what the selection procedure for the new head will be, while the current provisions of the law are unconstitutional – these are the questions that neither the Constitutional Court, nor the Parliament, nor the Office of the President has answers to.

In parallel with the developments around NABU, the fate of another anti-corruption agency came under the spotlight – the Specialized Anti-Corruption Prosecutor’s Office (SAPO).

In November 2020 the contract of the chief anti-corruption prosecutor Nazar Kholodnytskyi will have expired. On July 15, the Parliament failed to collect enough votes to appoint seven out of the 11 members of the selection committee tasked to choose the head of SAPO and other employees of the agency.

On August 21, Head of SAPO Nazar Kholodnytskyi filed a resignation letter. It was endorsed on the same day by the Prosecutor General Iryna Venediktova.

Since then, Venediktova is the de-facto head of SAPO, until the new head is appointed.

On September 3, the Parliament made another attempt to appoint the majority of the selection committee members that will choose a new head of SAPO. They failed to collect enough votes again.

On September 17, MPs cast 239 votes that were enough to appoint seven members of the selection committee to choose the SAPO head. Four more members are to be chosen by the Prosecutors’ Council. The problem is that both the Western partners and Ukraine’s anti-corruption NGOs raise doubts on integrity of the selected candidates.

Ahead of the parliamentary voting to appoint the members of the selection committee, ambassadors of the G7 member states appealed to the Ukrainian authorities asking to support the anti-corruption agencies and protect NABU and SAPO.

Statements were made in the European Parliament reminding of the risk to have the Ukraine-EU visa-free regime revoked following undue selection of the head of the Specialized Anti-Corruption Prosecutor’s Office. The message came from Viola von Cramon-Taubadel, MEP, vice chair of the Delegation to the EU-Ukraine Parliamentary Association Committee.

“While international community is occupied with Belarus, Ukraine government is hastily pushing candidates lacking experience and integrity to select SAPO head. This will not fly. Government is jeopardizing visa-free with the EU and further tranche of EUR 1,5 Billion assistance,” the MEP wrote on Twitter.

Reaction of the U.S.: further support at risk

Further support to Ukraine by the U.S. and the EU will depend on integrity of the selection committee set to choose the SAPO head. The statement was released by the U.S. Embassy in Ukraine shortly after the parliamentary voting.

“The U.S. and the EU take note of the Rada decision to appoint members to the commission to choose the Specialized Anti-Corruption Prosecutor. The commission needs to embark on a transparent process with candidates’ integrity and merits at its core. Our further support will depend upon it,” the comment reads.

Political dismantling of the anti-corruption system? What experts say

Start of the system dismantling. To form the selection committee to choose the head of the Specialized Anti-Corruption Prosecutor’s Office, the majority party teamed up with pro-Russian forces in the Parliament, head of the “StateWatch” NGO Hlib Kanevskyi told “Radio Liberty”.

“We see the ongoing political dismantling of the anti-corruption system that was built in previous years. I do not rule out that following SAPO and NABU, the MPs from the “Servant of the People” (Sluha Narodu) faction will team up with the opposition politicians that have a clear anti-Western position to tame the National Agency for Corruption Prevention that was demonstrating its independence in the past months by making new checks on MPs and ministers. If the Agency is not tamed, we will shortly see the reports on numerous violations in the declaration of assets submitted by those authority representatives. Surely, one may keep sticking to the naïve beliefs that submissions to the Constitutional Court are part of the struggle for justice. In my opinion though, it actually is the dismantling of law enforcement agencies that in the recent years gave hope to the society that corruption can be overcome,” the anti-corruption expert elaborates.

Direct violation of conditions for visa-free regime. The “Anticorruption Action Center” also released a straightforward and harsh statement. “The ‘Servants of the People’ directly violated the conditions for the visa-free regime with the EU by voting for a puppet commission to select the head of the Anti-Corruption Prosecutor’s Office, disregarding the statements by the EU Ambassador, by Ambassadors of the G7 member states, and influential MEPs who were warning that such voting can have a high price,” the “Anticorruption Action Center” said.

The attacks are systematic, but there are safeguards. Head of the legal department at the Transparency International Ukraine Kateryna Ryzhenko admits that the attempts to attack anti-corruption agencies in Ukraine are systematic. Yet, it is too early to consider the anti-corruption system destroyed, the expert adds.

“Undoubtedly, there are systematic attempts to weaken anti-corruption agencies and take away their independence. The parliamentary voting for the selection committee to choose the head of SAPO proves it. However, it is too early to say that anti-corruption agencies have been neutralized. There are numerous safeguards including the guarantees of independence from the management that prosecutors and detectives of those agencies have. There is indeed the resistance that was predictable. Does it hamper the work of the anti-corruption system? Yes, it does. Can we say that it has been ruined? No! But, unfortunately, we are at a stage when reforms do not advance in Ukraine, when reform-makers are directing their efforts to preserve the achievements that were made after the Revolution of Dignity and not let them get rolled back,” Ryzhenko explains.

What does the Office of the President say?

Responding to all remarks of accusation, criticism and worry made by the Western partners and the Ukrainian society, the Office of the President of Ukraine called to assess the work of anti-corruption agencies based on results and refrain from “excessive emotions” or “speculative assessment”.

“We call on all participants of the public discussion on the state anti-corruption infrastructure to refrain from excessive emotions as well as speculative assessment of performance of particular individuals serving in anti-corruption agencies. Eradicating corruption is a compulsory component for European and Euro-Atlantic integration of our country. Efficiency of anti-corruption efforts will not be measured by the surnames of candidates taking up certain posts. Institutions need to function regardless of surnames and in line with the law. Results of the anti-corruption infrastructure at work need to considerably grow, sentences in the first place. We would like to emphasize that the head of SAPO, whoever is selected by the committee, needs to fully understand that,” the statement of the Office of the President reads.