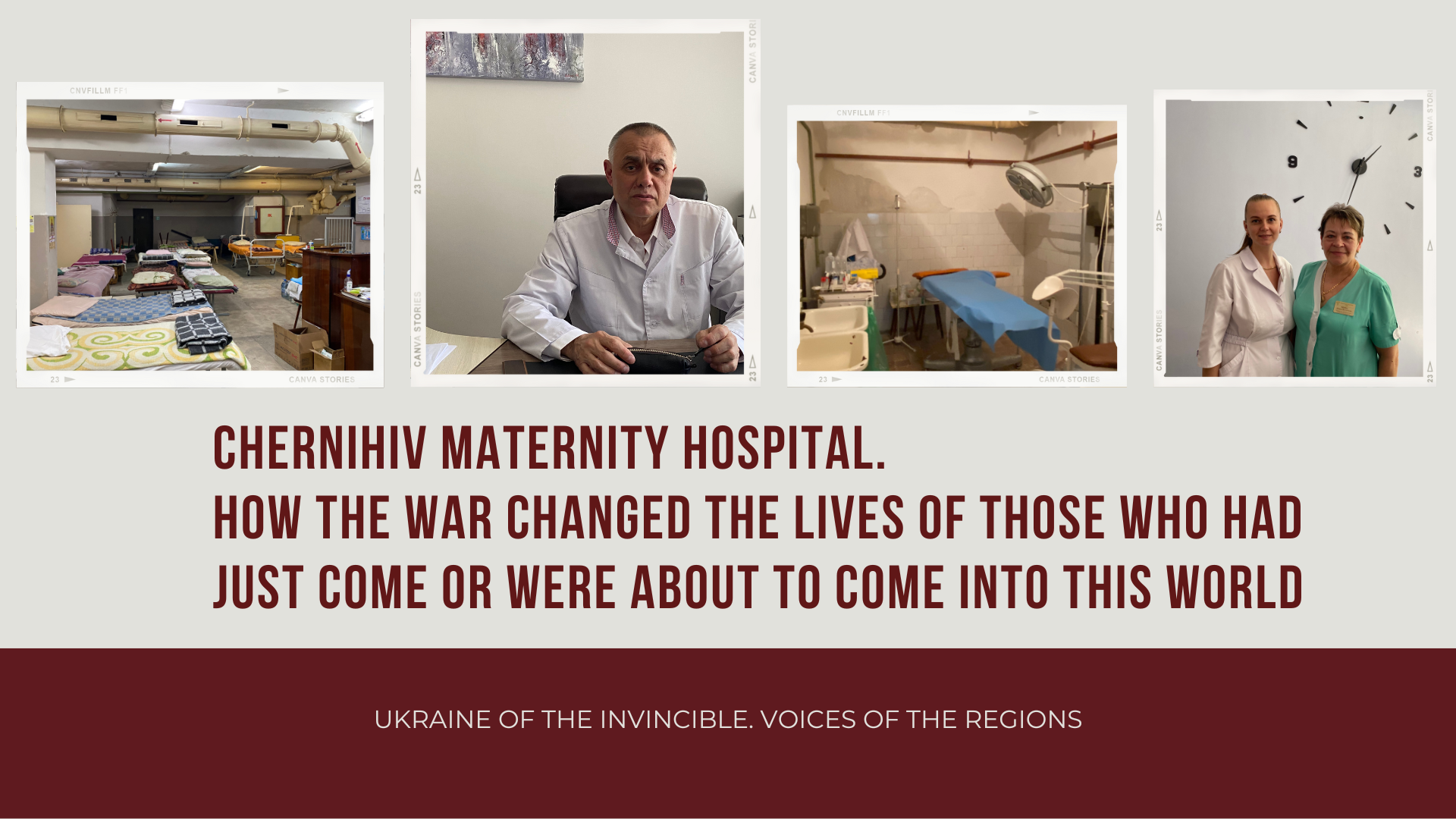 What will the children of war become in the future – engineers, doctors, scientists, outstanding athletes? Or perhaps soldiers? It’s useless to seek answers to these questions today. Meanwhile, the number of war children is growing. According to the Ministry of Justice, 36,425 children have been born in Ukraine since February 24th. And this is only as of early May.

The staff of the Chernihiv maternity hospital had to live and work in the medical institution for 40 days, because it was extremely dangerous to move around the city. During that time, 137 babies were born in the city. These stories are about how the war changed the lives of those who had just come or were about to come into this world and their parents.

Son born on the first day of the war

Chernihiv lawyer Mykola Torbeyev and his wife Yevhenia have two daughters. In February, the family was expecting a third child.

“The war caught me and my wife in the maternity hospital. On the morning of the first day, amid the explosions of orc shells, my wife gave birth to a son!” Mykola Torbeyev recalls. However, they could not celebrate that pleasant event together, as Russian troops were advancing on Chernihiv.

The father and his two daughters spent several weeks without contact in an occupied village on the outskirts of Chernihiv, as they couldn’t return to the city: the entrances and exits were mined, and then the occupiers entered the village. Mother and baby were hiding from artillery shelling and airstrikes in the city’s bomb shelters and basements.

“We have united by now and all the children are safe. It was only a month later that a doctor examined our son for the first time. The boy was named Danylo,” the father said.

He notes that it is hard for children to accept and experience war at any age. All experiences affect their emotional sphere. “The younger Dasha (4 years old) did not understand what really happened. We played scouts, and our basement was our secret headquarters, and the breakthrough to Chernihiv under mortar fire was our trial of real scouts. I managed to turn it into a game for her. And she just played bravely,” says Mykola Torbeev. However, it was hard with the elder Liza. She understood everything and it did not go unnoticed for her mental state. The same was with his wife. “After several weeks of occupation and shelling, we broke through to Chernihiv, and I was able to take my wife and the newborn son away. It was a day before the bridge across the Desna was blown up,” Mykola Torbeyev said. His wife and children are currently undergoing rehabilitation.

Almost one hundred and fifty parents can share similar stories, because amid the fighting near Chernihiv, 137 babies were born in the local maternity hospital, including two triplets and two pairs of twins.

Medical staff lived at work for over 40 days

Vasyl Husak, general director of the Chernihiv maternity hospital, says the institution operated during the war, despite constant shelling, power and water outages. The hospital building, which was insulated last year, was also damaged by shelling – 110 windows on several floors were blown out, one wall of the building was damaged and abundantly cut by shrapnel from the outside. Due to the prompt restoration work, the maternity hospital’s heating system was not damaged.

Read also: Let it hit us, but so that we wouldn’t suffer

Vasyl Husak admits that he saw no other option but to stay at work and ensure the viability of the hospital, respond quickly to all challenges and solve problems. He lived at work for more than 40 days. Other employees followed the boss’s example. Part of the staff – over 120 people – remained in the basement of the maternity hospital throughout the fighting around Chernihiv, and worked in a specially equipped bomb shelter. The general director notes that after the war began, he advised some employees, especially mothers with children, to leave Chernihiv. However, there were people who left their workplaces in danger. As a result, more than 200 employees of the maternity hospital were suspended under martial law.

“I also have a family, and I have grandchildren who had to be rescued. My daughter left with her children – 3 and 5, on her own. I could not go with them. I believe that you have no right to leave your job if you choose medicine. You have to work for people. We must treat the sick, even enemies,” Vasyl Husak stresses. Those who left the job violated the doctor’s oath, because they had vowed “to devote all knowledge, effort and ability to the protection and improvement of human health, treatment and prevention of diseases, to provide medical care to all who need it.”

Vasyl Husak has combat experience – in 1983-1985 he was a medical instructor in the war in Afghanistan. “You try to forget, you want to forget the war, but it doesn’t work. I still dream that I am young – with a cigarette. Although I haven’t smoked for more than 30 years,” he said. He jokes about his second combat experience – “I didn’t shoot here, here I delivered babies.”

Probably it was due to the head doctor’s combat experience that his institution was well prepared to work in wartime. Everyone is in their place and knows what to do.

During the fighting near Chernihiv, women in labor were taken to the maternity hospital accompanied by territorial defence fighters. Childbirth usually begins at night, and at that time there was a curfew in the city. So, in order protect women with their babies about to be born, territorial defence fighters took care of Chernihiv families. While in peacetime many women from the region gave birth in the Chernihiv maternity hospital, during the war – only from Chernihiv.

Midwife Olena Kolos and head of the neonatal department Victoria Bazarna helped the new residents to come into this world. Olena Kolos says that she has only recently returned home because she has been living at work since February 24.

Read also:  Family from Komyshuvakha: I’m desperate to go home, even to the ashes, but Ukrainian…

The women first gave birth on the ground floor of the maternity hospital, and then, when the situation became complicated, in the bomb shelter. The operating rooms were also set up there.

Doctors emphasize that all women in labor were treated according to medical protocols. However, the early discharge was also practiced to reduce the time of staying in the hospital. “You know that there were neither complications after the birth nor covid cases. But even after discharge, we tried to stay in touch with the patients. I gave them my personal mobile number so that a woman could call and ask what she was worried about,” Victoria Bazarna said.

She underlines that despite stress, most women were able to establish lactation, because breastfeeding is a guarantee of a baby’s future health.

We had to rescue children not only in the maternity hospital. One of the women with two children who were born prematurely had to be sent to the capital for treatment. Victoria Bazarna and chief of intensive care unit Oleksandr Hoshko carried newborns across a pedestrian bridge, where volunteers evacuated people from Chernihiv. And thus, under fire, doctors saved the lives of their young patients.

On the World Nurse’s Day, President of Ukraine Volodymyr Zelensky awarded the senior midwife of the Chernihiv maternity hospital Vira Tselyk. She was awarded the Third Class Order of Princess Olha. Vira Tselyk organized the work of the department in the bomb shelter amid constant shelling and airstrikes. She delivered babies and was always there for patients and their families.

The wartime appeared to be a challenge not only for women who became mothers to the sounds of air-raid siren and shelling, but also for doctors who took care of the health and lives of both newborns and their mothers. Everyone coped with the challenges.

Bomb shelter – for patients and not for civilians!

Volodymyr Vinnytskyi, Deputy Chief Physician for Technical Part, is conducting a tour of the maternity hospital’s bomb shelter. He notes that after the liberation of the city, journalists often visit the medical facility.

“We repaired the bomb shelter in 2014. It is equipped with ventilation, water and heat supply systems. Besides, we repaired electric motors, and now we also have generators,” he says.

Volodymyr Vinnytskyi says that in the pre-war period he periodically organized emergency evacuation trainings for medical personnel. But his colleagues did not like it very much. However, as soon as the shelling and bombing of Chernihiv began, everyone knew where to run and what to do.

“People from the surrounding houses also went down to the bomb shelter with the beginning of the shelling. However, I had to apologize and explain to them that the bomb shelter is for patients and working shifts. Civilians are not supposed to be there,” he said.

Women before and after childbirth, as well the shift members were hiding in the bomb shelter for 100 people, with an area of ​​400 square meters. All other staff lived in the basement of the maternity hospital.

“We worked and people helped us!” says the general director of the Chernihiv maternity hospital. Volunteers’s help was invaluable during the siege of the city. They were helping with food, hygiene products for women and babies, and so on. The hospital also received assistance from abroad.

Now the staff of the maternity hospital is returning to a “peaceful” life, working as usual –  24/7.

Vasyl Husak complains that the number of births has decreased significantly: only three births a day compared to ten before the war. That’s because most pregnant women left the city. So, we can only hope that after the victory the reconstruction of the country will begin and the birth rate will increase. “If we do not win, our nation will disappear,” said the doctor, and you can’t but totally agree.