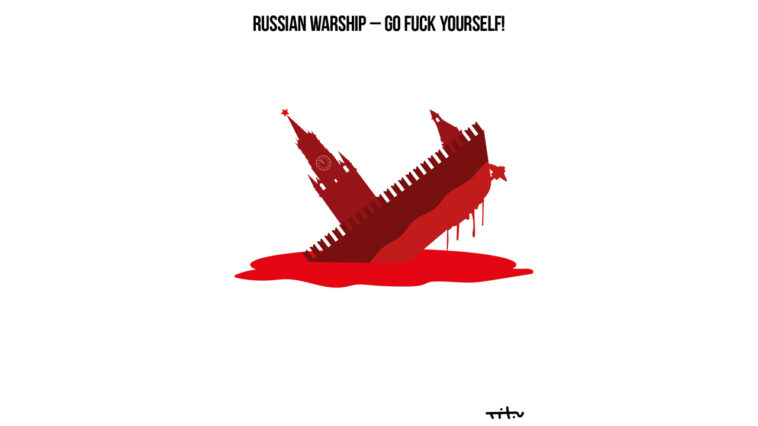 The phrase of the Ukrainian border guard from Zmiinyi (Snake) Island – who advised the Russian warship to fuck herself – became highly popular and instantly spread throughout the country, because it was concise, accurate and exhaustive. But still, let me clarify it a bit so as to avoid misunderstandings.

1. The Russian warship – is unique, one of its kind. There are no other Russian ships. The Russian Federation is an integral authoritarian body in which there are no opposing parties or alternative views of reality. Maybe the situation will change in the future, but now it is the case. Putin has the maximum support of the people; the opposition does not exist as a class. The entire state machine is under Putin`s control.

2. The Russian ship is a military warship. Its goal is to attack and conquer. Even if some parts of the ship might resemble a cruise liner, it is an illusion. All parts of the warship are trying to destroy Ukraine`s independence in every respect.

3. The Russian warship has many cabins with different purposes and weapons with one strategic goal – defeat Ukraine. Here are the main cabins:

– Hard power cabin. Everything is clear here – the armed forces of the Russian Federation, their special services, etc.

– Diplomatic cabin. Lavrov and his soldiers, scattered around the world.

– Cabin of traitors. These are Ukrainian citizens who work for Russia and have their own cabin on the warship.

These cabins are quite obvious and transparent. No one has any questions about their military character and hostility. But now I am going to show the disguised cabins.

– Shakhmatov’s cabin. Alexei Shakhmatov was a prominent Russian linguist and liberal. He was a great friend of Ukraine and the Ukrainian language until Ukrainians started to think about the secession from the Russian Empire. All modern Russian liberals are in Shakhmatov’s cabin. Now they are even ready to live with the fact of Ukraine’s independence, but they will never accept the wish of Ukrainians to leave “the common cultural space”. They will cling to the heritage of the Kyivan Rus and other topics that somehow unite us.

– Stanislavsky’s cabin. All those who suddenly woke up and decided to oppose the war travel in this cabin. They are pacifistic and anti-war only because of the fact that Russia is losing and the zinc-lined coffins and the black bags with corpses are being delivered all over their country. If Russia had completely defeated Ukraine and annihilated half of our population, they would not have cared at all. Where were all these pacifists in 2014-2015? This is the question that Russian theatre director Stanislavsky might have asked them. (He is the passenger of the next cabin).

– Tolstoevsky’s cabin. We often discuss whether Russian culture, literature, music and art can be linked to the current events. During the war, the cultural sphere resembles minefield. The sappers advise one thing: if you see a mine – go around and do not try to demine it yourself. So, for now, all this “great Russian culture” is an integral part of the warship. Only after the war the professionals may try to demine some parts of it and see if it`s safe.

There are some minor cabins which are not as important as mentioned. Ukraine will win not after the defeat of the Russian army, but after the Russian warship (with all its cabins without any exception) will finally concentrate on fucking herself without bothering Ukraine.