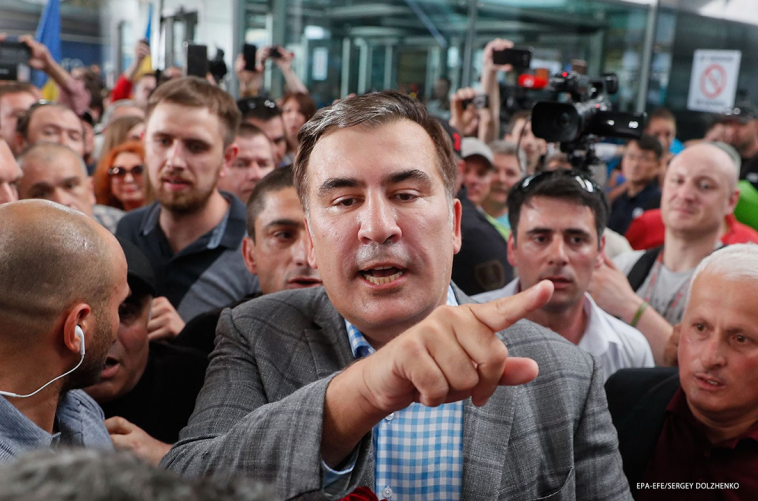 The former President of Georgia Mikheil Saakashvili makes a political comeback in Ukraine. He is not back into the government, contrary to what was said earlier, but to the National Reform Council. He was appointed head of the Council’s executive committee. Searching for the meaning it conveys, UCMC turns to facts in a bid to project how likely it is that this new position will translate into efficient reform delivery.

Rumors of Saakashvili’s comeback in Ukrainian politics have swirled for long. He was thought to get the seat of the Vice Prime Minister on reforms in Denys Shmyhal’s cabinet. This week it has become clear that Saakashvili did not succeed to get 226 votes in the Parliament to back the seat in the government.

Mikheil Saakashvili negotiated with MPs for several weeks, to no avail. Neither President Zelenskyi, nor Prime Minister Shmyhal tried to convince the MPs to back his appointment. The enterprise was entirely put in his hands.

Interestingly, Saakashvili was appointed to the National Reform Council, where back in 2015, at one of its sittings he had a notorious quarrel with Interior Minister Arsen Avakov that culminated when the latter threw a glass of water at him.

Executive Reform Committee organizes the work of the National Reform Council. Formally, the Council is chaired by the Head of the State, whose deputy is the Head of the Presidential Administration, Andriy Yermak.

Commenting on his appointment, Saakashvili said that “Ukraine needs to be pulled out of the bog” and that he stands ready to assist the President in accelerating reforms as much as possible.

“The President is determined to make radical reforms and changes. I liked his determination a lot, because the mere fact of my appointment shows that he is ready to make extraordinary steps that many people have advised him against. Those who were talking him out of it primarily want to preserve the status quo in Ukraine, the status quo is a bog,” Saakashvili said.

“Ukraine needs to be pulled out of the bog, only the President can do it, he has never been a criminal and will never become one. I am convinced that President Zelenskyi is like that, he has an ambition to stay in Ukraine’s history as a figure that made good for his country and for each Ukrainian. I stand ready to be helping the President as much as I can, drawing on my experience, my achievements and my defeats,” Saakashvili proceeded.

Government as unsuccessful target. When Saakashvili aimed for the government seat, he said his main goal would be to make liberal economic reforms and negotiate billion-dollar aid for Ukraine with Western creditors.

The idea of inserting Saakashvili into the government was taken with caution by the “Servant of the People” (Sluha Narodu) faction. The record of scandals of the ex-President of Georgia is too big.

Saakashvili’s comeback into Ukraine’s executive branch allegedly owes to the Head of the Office of the President Andriy Yermak who knows Saakashvili since their university years. They both studied at the Kyiv International Relations Institute, and graduated with a several year difference. It is quite possible that they can be on friendly terms.

Many MPs were critical of his possible position in the government, they charged that he is conflict-prone and asked for his concrete action plan. Some MPs livestreamed Saakashvili’s address during the meeting, it was too emotional and, as some lawmakers said, meaningless.

He also met with “Golos” (Voice) faction and could count on support of “Batkivshyna” (Fatherland) faction. He stood closest to the possible appointment in the government in late April, but in the end got too little support from the single-party majority. That’s where the rumors of Saakashvili’s appointment outside of the government started.

Georgia’s position. The next day after Saakashvili’s appointment to the National Reform Council of Ukraine, Georgia recalled its Ambassador in Kyiv for consultations. Georgia’s Foreign Affairs Minister David Zalkaliani said it was a “routine practice” applied when “problems arise in bilateral relations”. At the same time the Minister reassured that Georgia is not considering breaking off diplomatic relations or revising strategic partnership with Ukraine.

In Georgia Saakashvili was sentenced in absentia for abuse of office, Georgian authorities consider his appointment in Ukraine “absolutely unacceptable”.

What are the powers of the National Reform Council? After Volodymyr Zelenskyi took office, the Council and its Executive Committee did not work.

Zelenskyi has now changed the Committee’s configuration. Its only head is Mikheil Saakashvili, his deputy is Oleksandr Olshanskyi. The President chairs the entire Council, his deputy is the Head of the Presidential Administration, Andriy Yermak.

It is hard to understand what actual weight Saakashvili will have if he has no other executive position but at the Executive Committee.

The Committee and its Head were granted several more powers that include representation of the Executive Committee and National Reform Council’s decisions in cooperation with other agencies chaired by the President, state agencies and local self-government.

In hours that preceded Saakashvili’s appointment, head of the “Servant of the People” faction Davyd Arakhamia said that Saakashvili’s work at the National Reform Council can become more effective than it would be in the government.

“Within the National Reform Council there are representatives of three branches of power – the Office of the President, the government and the Parliament. Making reforms inside this triangle is realistic. (He) will facilitate reforms in Ukraine,” Arakhamia said.