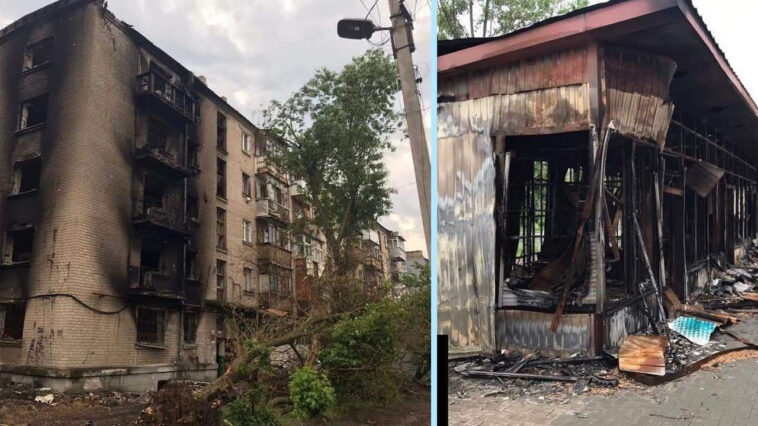 During the day of May 23, the Russian occupiers killed at least 11 residents of Donetsk and Luhansk regions and injured 13. The information is being clarified, the debris removal in Kramatorsk district is underway.

On the border of Dnipropetrovsk and Donetsk oblasts, in the area of ​​involvement of the State Emergency Service units, which are part of the Joint forces, the enemy fired a missile at Pavlograd and Zaliznychne, Synelnykove district. 12 residential buildings, a railway station, 5 outbuildings, power lines, track sections were destroyed.

Units of the SES, part of the Joint Forces, have extinguished two large fires in Soledar and Bakhmut. Due to intense enemy shelling, it is impossible for rescuers to work in many areas.

Over the past day, rescuers evacuated 678 people from the areas of hostilities in the Donbas.

According to Pavlo Kyrylenko, head of the Donetsk Regional Military Administration, on May 23, the Russians killed three civilians in the Donetsk region: in Zoria, Soledar, and Adamivka. Six more people were injured.

According to the press service of the Joint Forces, 33 houses, a kindergarten, a bank branch, an agricultural enterprise in the village of Kalinove, the monastery of St.John of Shanghai (Adamivka) of the Sviatogirsk Holy Dormition Lavra, the main gas pipelines of regional significance were destroyed in Donetsk region.

According to the press service of the Joint Forces,  due to intense enemy shelling, it is impossible to obtain complete and prompt information about the destruction of the civil objects in Luhansk region. According to preliminary data, at least 25 residential buildings, the office of the National Police regional department, the premises of the children’s entertainment center and a pharmacy were damaged.

According to Serhii Haidai, head of the Luhansk Regional Military Administration, yesterday, on May 23, the Russians chaotically and almost continuously shelled Severodonetsk.

According to him, four people were found dead in a high-rise building in the city yesterday.

When police first arrived to help, they found the bodies of two men and a woman with no signs of life. Another woman was seriously injured. She was provided with the first aid and hospitalized. Unfortunately she died on the surgery desk. All four were in the same apartment building, probably lived there constantly.

Yesterday, this street came under very heavy fire – several houses were damaged. In total in the city – at least six. The same number was in Lysychansk, where a man was saved in one of the high-rise buildings.

Four more houses were destroyed in Zolote and three in Novodruzhesk.

Shellings are very powerful. It is not always possible to count all the destruction on time – because of difficulties to get to the scene.

“We received information that the enemy shelled again the building of the regional boarding school for children in Hirske two days late. There are also constant reports on destroyed housing in Popasna and Rubizne,” Serhii Haidai said.

Since the beginning of the Russian invasion of Ukraine, 314 civilians have been killed in shelling and bombing in the Luhansk region.