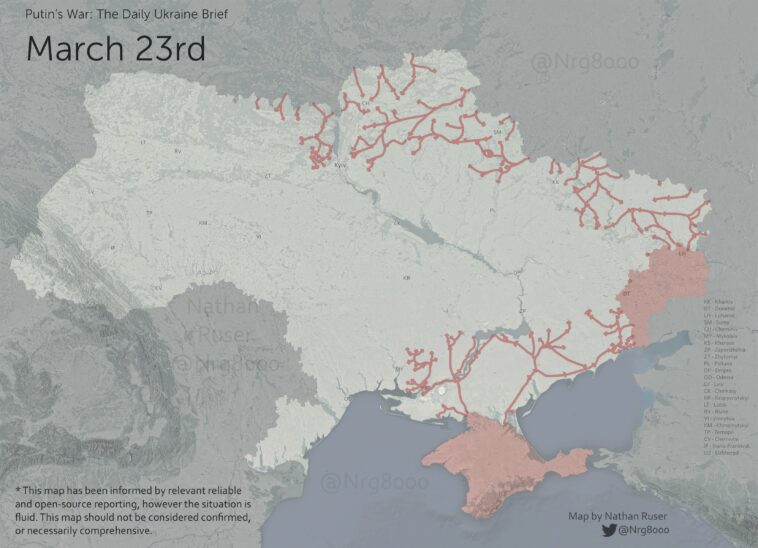 The first use of phosphorus munitions occurred during World War I. Between 1970s and 1980s, they were banned by international conventions including by protocols to the Geneva Conventions of 1977 due to their indiscriminate effect and severe suffering they inflict.

The Ukrainian Armed Forces destroyed 105 Russian aircraft since the invasion began, advisor to the Office of the President of Ukraine Oleksiy Arestovych said.

Russians’ support of war on the rise, survey. Russians increasingly back the war against Ukraine as dissent declines, a survey by the Russian Public Opinion Research Center (VCIOM) finds. About 74 per cent of respondents said they somewhat supported the action, a nine per cent increase from February 25.

About 17 per cent do not support the operation, an eight per cent decrease from February 25. Nine per cent said they were on the fence.

The Russians’ views of the “special operation’s” goals did not change in the past two weeks. Forty-six per cent say Russia wages a war in Ukraine to protect itself, disarm Ukraine, and thwart NATO from installing bases in the country.

Ukraine in Flames #13. Russian energy ban is a health treatment to the global economy

UKRAINE IN FLAMES project is created by Ukraine Crisis Media Center, Ukrainian Catholic University’s analytical center and NGO “Euroatlantic Course”. We are aiming at searching a loud support for Ukraine in the war started by Russia on the 24th of February 2022.

Whatever happens with oil and gas prices will spike rates of inflation and stress supply chains in every other market across the world. Regardless of obvious shock waves that the Russian energy ban sent across the global economy, sanctioning the Russian energy sector should continue to deprive the aggressor of resources to continue its assault on Ukraine and develop its military capacity. The adjustment period for Russia’s energy partners in Europe will be short and uncomfortable, but disruptions will be temporary.

The US has already banned all imports of Russian oil, liquefied natural gas, and coal. The EU and the US have announced a ban on new investments across the Russian energy sector. The EU investment ban will apply to the whole energy sector, excluding nuclear energy because some nations in the EU depend on technology from Moscow. The EU will cut two thirds of its gas imports from Russia by the end of 2022 and plans to become independent from all Russian fossil fuels well before 2030. The support for the energy embargo is not unanimous across the Union: some nations were asking for 2030, others 2027, and some now.

Not all European state partners are ready to take a principled stand to stop supply from Russia immediately, as the US did. The largest importers of Russian fossils – Italy, Netherlands, Serbia, Belarus and Germany are not ready to take action. Though the EU and the US have already made significant efforts to end its reliance on Russian oil, gas and coal, Russia still has important energy partners like China and South Korea that are more pragmatic in their choices.

How does the Russian energy ban affect its major importers in the short term? What is the prognosis for energy sustainability in Europe, the US and Asia?

What effective alternative energy scenarios are there for the EU, the US and Asia without Russian fossils?

What role can Ukraine play as an energy partner in the European Energy Union?

If you want to support Ukraine against Russian aggression, check the link with recommendations by Ukraine Crisis Media Center – https://uacrisis.org/en/help-ukraine