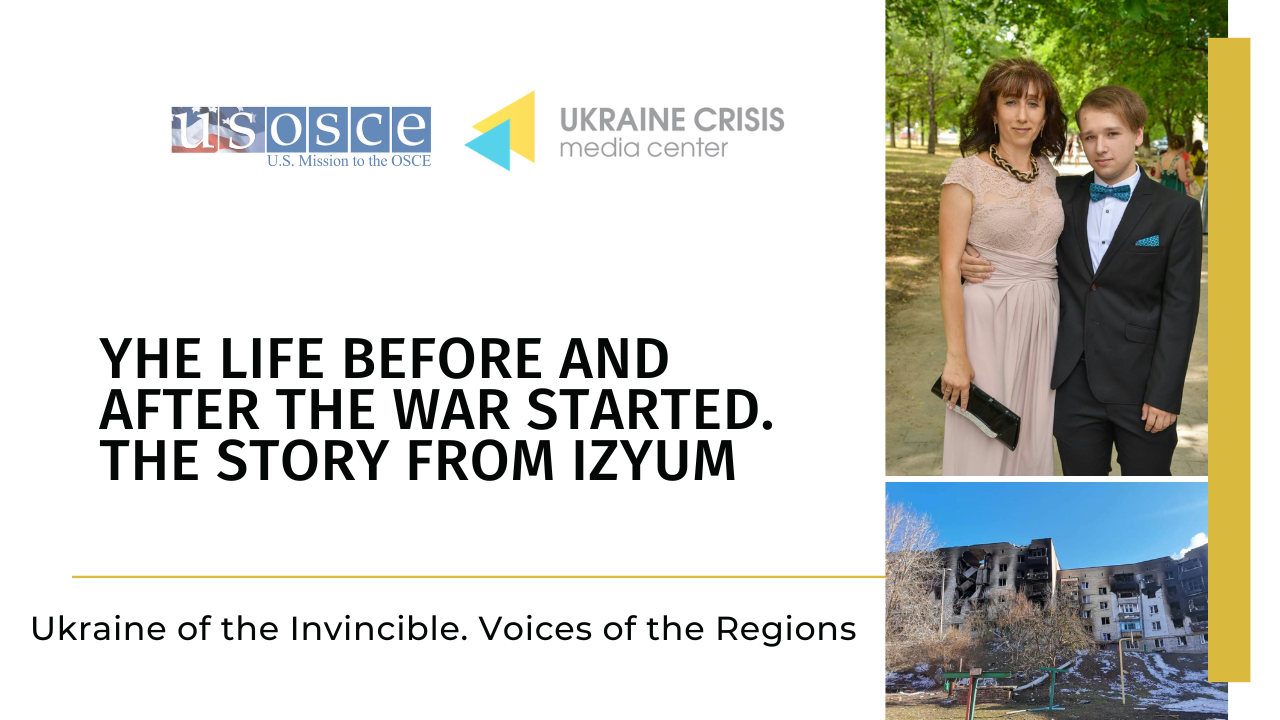 During an ongoing war, demographers are at a loss – it is hard to estimate the population size. According to Ella Libanova, Director of the Institute of Demography and Social Research at the National Academy of Sciences, there are about 34-35 million people in Ukraine now. Of them, 7 million are internally displaced. This is the force that will help us all, because they will continue living in Ukraine, unlike those Ukrainians who are not going to return from other countries.

The demographers who see a certain benefit in internal migration agree with this. Having united, people from different regions will change the social and cultural code of the Ukrainian. However, this path is full of grief, suffering and loss. I hope that the family I’m going to tell you about will cope with it. They spent a month under artillery barrage and aircraft shelling and managed to leave Izyum, because in early April the russian occupiers took temporary control over their hometown.

Life before the war

Each of us led a peaceful life with its problems, pleasures and daily worries. Natalya Kuchuhura worked as a cook in a kindergarten, and then as a cleaner in the culture department at the Izyum DSA. Her husband Yuriy, she has been married to for more than 20 years, is a driver at an agricultural enterprise in one of the villages. The family has a son, Artem. On finishing Izyum School No. 3, the boy went to the Kharkiv National Technical University of Agriculture, and was a good student. There are also two furry pets in the family – snow-white cat Tomas and black Mika. “We can’t imagine our life without cats,” says Natalya. “They are part of our family.”

That’s how it would go. An ordinary family, with its traditions and individual family charter, lived a peaceful life as best it could.

“On February 24, I went to work. Everything was as usual except that the bus was empty for some reason, and I could see lines at ATMs through the windows. When I arrived, they told me that the war had broken out. Frankly, I asked to turn on the TV to confirm it,” says Natalya.

Natalya’s husband was at work, and her son was at home. “What shall I do? Why war?” the woman kept thinking.

Reality burst in a few hours later: a curfew was introduced, and the same evening a shell hit a neighboring house. Police, an ambulance, a fire brigade and… a basement.

“The house we live in is in poor condition, so my son and I ran to the basement in the neighboring house. We brought some chairs so that we could sit at least,” Natalya recalls. “It was cold, and it was very scary to accept the reality. There were a lot of kids in the basement room where Artem and I were. They were constantly crying, begging to go home. We drew with them, cut paper, played, and tried to distract them from the explosions that could be heard from above. In the daytime, we ran home to go to the bathroom, take some food and clothes. When there was a connection, my husband called and shouted into a mobile: “Stop tempting fate, we must leave Izyum.” But I waited and didn’t listen to anyone, because I couldn’t believe all that horror would last.”

It got worse every day. Food was running out, the bombing and shelling did not stop, the city was purposefully destroyed. Every morning, when leaving the basement, people saw terrible pictures: half the house opposite was gone – it had been hit by a missile; people looked like ghosts, and all around there was rumbling and killing.

Eventually, Artem said to his mother: “That’s enough. I can’t stand it any longer. I just want to sleep!”  And then he called his father. But Natasha went to work, because there were stray dogs that she had taken care of before the war. The woman says: “I walked across the then still whole bridge for the last time, looked at my home town in ruins and remembered how, almost every day since February 20, my son had asked me to pack a bug-out bag but I would laugh and refuse to do it, wondering why he was so obsessed. Who cares what they say on TV? There can’t be a war…”

The buses were no longer running; the military, having informed the frail woman about the danger, only shrugged their shoulders in surprise when she explained that she was going to feed the dogs, and let her go to the four winds.

Under the shelling, Natalya managed to get to the tailed stray dogs, fed them for the last time and ran to her house, where her son and husband packed the essentials into their old blue Zhigul. It was on March 5.

The Kuchuhura family left Izyum under air bombardment. Just a few minutes after they passed the checkpoint, an aerial bomb hit it. People rushed to the village of Virnopilllia that used to be large and populous, but over time became almost desolate. But the war gathered hundreds of Izyum residents there; they crammed into few houses – several families in each house just to avoid traveling far from their hometown.

The heroes of this story had their own house, where they planned to stay until Izyum became free, but Virnopillia ended up on the front line. The village was shelled and bombed every day. Planes traditionally flew from 2 to 4 in the morning, so Artem never managed to sleep. First electricity disappeared, then – water. All numerous inhabitants, went to one well for water. They somehow managed to cook. They awaited the nights with fear, because aviation is more terrifying than artillery. “During the bombings, we either ran out of the house, lying down on the ground, or stayed in the house, watching how the chandelier on the ceiling “danced”, and held on to the floor, which seemed to be lifted by an evil force,” Natalya says. This continued until the end of March.

Restless by nature, Natalya does not know how to sit in one place. She always had to be on the move, so she persuaded her husband to go to Izyum to buy bread, because at that time volunteers did not go to Virnopillia. And the woman also wanted to take her mother with her and encourage her friends to leave the city.

Natalya remembers how she and her husband were driving through the city and did not recognize it. Fragments of slate, boards, and bricks were scattered along the road, and the once beautiful houses were half-ruined, burned, with broken windows and bared glass teeth in the ruined window frames.

Natalya managed to phone her mother Alina Mykolayivna, but she categorically refused to leave her home. Her friends also refused to leave, hoping for a miracle. “We did buy bread, but we were returning to Virnopillia without our passengers. But who knows where it was better at that time,” Natalya remembers her friends – Viktor, Yulia, seventeen-year-old Yaroslav and six-year-old Vladyk. In late March, they finally escaped from Izyum and stayed with the Kuchuhura family for two days, but those stays cannot be called peaceful. It was they who encouraged the Natalya’s family to flee from Virnopillia because the airstrikes became more frequent. “By a miracle, they remained alive; then they went on to Izmail, Odesa region, where they are now,” Natalya says.

Kuchuhura’s house in Virnopillia was badly damaged, and a fragment of an exploded cluster bomb was stuck in the yard. Their relatives remained in Izyum and their apartment survived. But, according to neighbors, russian invaders repeatedly broke into it.

The life of displaced persons is not easy; it is divided into BEFORE and AFTER the war started. Natalya cannot come to terms with current events and does everything possible to help others. Thanks to the “Clothes Bank”, the displaced people were provided with clothes. They also receive humanitarian aid. They look for work, help the house’s owner who has sheltered them, and carefully follow the news, waiting for liberation of Izyum. ” No matter that the city has suffered considerable damage,- Natalya concludes, –  we’ll rebuild it.” We are fine here. However, as they say, there is no place like home. Our soul remained there – in Izyum and Virnopillia.