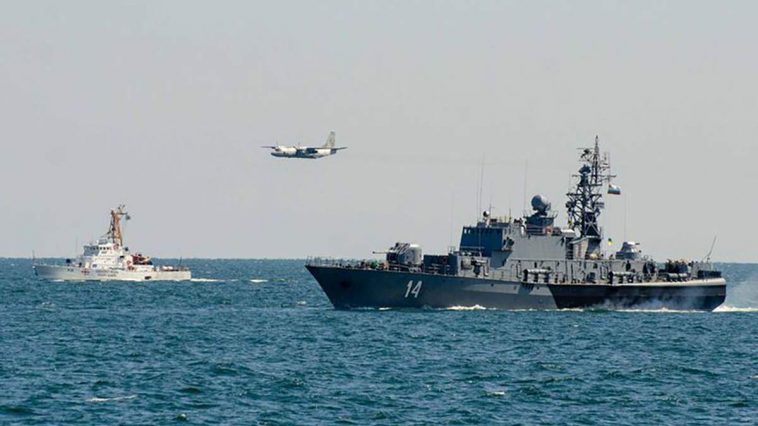 On July 11, Russia-backed militants violated the ceasefire 11 times. The Ukrainian troops incurred no casualties, the Joint Forces command said in a morning report.

Russia’s proxies fired from 122-mm artillery systems near Myronivske, and 120-mm mortars near Vodyane, outside Donetsk. There were similar attacks throughout last week.

Reports of blasts were posted on social media by pro-Russian accounts. Fatalities and injuries were reported in the incident.

Sea Breeze 2021 exercise ends. Why is it important for Ukraine?

The 2021 iteration of the Sea Breeze had the largest number of participating nations in the exercise’s history – 29.

Through the exercise, the Ukrainian service members get important experience of cooperation with the allies. At the same time, the exercise sends a signal to Russia that the West continues to support Ukraine. Hromadske journalists spent a week at the drills. Here are their key conclusions.

2021: simulated scenario of defense of Zmiyinyi island. Since 2014, simulated scenarios of Russia’s advance deep into Ukraine have been practiced within the exercise. The Ukrainian army practices response to those scenarios and multinational interoperability.

“Based on our experience of the events in Crimea, we simulated a scenario of the exercise for all the troops to practice interoperability. According to the scenario, the adversary is to land on Zmiyinyi island, Tendrivska Spit, and in Besarabia. We expect both airborne and amphibious landing,” said head of Exercise Sea Breeze 2021 aviation component Col. Anatoliy Hlynenko.

“From the technical standpoint, the exercise improves interoperability, from the political perspective it builds trust,” says Hanna Shelest, Director of Security Programmes at the Foreign Policy Council “Ukrainian Prism”. “It is important when (our partners) trust in our naval forces, know how they operate and what their capacities are, and that personal contacts are made. We also send a message to Russia on the political and diplomatic level signaling who we are, how strong our presence in the Black Sea is, and how ready we are to fight for our territorial waters,” Shelest proceeds.

Volodymyr Dubovyk, director at the Center for International Studies underscores the permanent presence of a NATO warship in the Black Sea in the past years. That’s also a signal to Russia that Ukraine is not alone, he adds.

“That does not mean that if Russia attacks Odesa or our warships, NATO warships will engage in battle. But, moral support is very important to us too,” he said.

Russia turns the Black Sea into a lake. Russia’s aggression against Ukraine is not limited to the occupation of Crimea and part of Donbas. Hanna Shelest names other components of Russia’s strategy in the Black Sea.

“First, (Russia tries) to monopolize the Black Sea region, and demonstrate that the Black Sea is Russia’s lake. Second, legitimize the occupied territorial waters. All their actions after they seized the Ukrainian warships show that they try to ‘take ownership’ of the 12-mile area around Crimea. Third, not to let the NATO members engage in action in the Black Sea region, reduce their presence, making it dangerous for them. Militarization, provocations, and closing down of areas serve that goal,” the expert said.

Artem Fylypenko, expert at the National Institute for Strategic Research says Russia wants to show that it owns the Black Sea. The situation there is not favorable for Ukraine or NATO allies.

“Russia wants to control the Black Sea region. It actually controls it already, except for the straits. Due to the occupation and militarization of Crimea they can dominate in the Black Sea,” Fylypenko said.

Crimean Platform as international response to Russia’s occupation of Crimea

7 years of Russian occupation put 2 million Ukrainians of Crimea in a critical situation amid the Kremlin politics of militarization and violation of International humanitarian law. As a response, Ukraine is looking for a new way to reintegrate the annexed territory, leaving the Kremlin no other choice but to negotiate about the annexation of Crimea instead of its common tactics of silencing military crimes and normalizing its aggression. On October 20, Ukraine’s President Volodymyr Zelenskyi announced the launch of the Crimean Platform, a new consultative and coordination format initiated by Ukraine to improve the efficiency of international response to the occupation of Crimea.

In Ukraine, the Covid-19 rate is stable, the case number is low. On July 11, Ukraine recorded 174 new coronavirus cases, 236 recoveries, and seven deaths. Hospitalized were 266 patients with suspected or confirmed Covid-19.

By the daily number of infections, Ukraine ranks 72nd in the world and 12th in Europe.