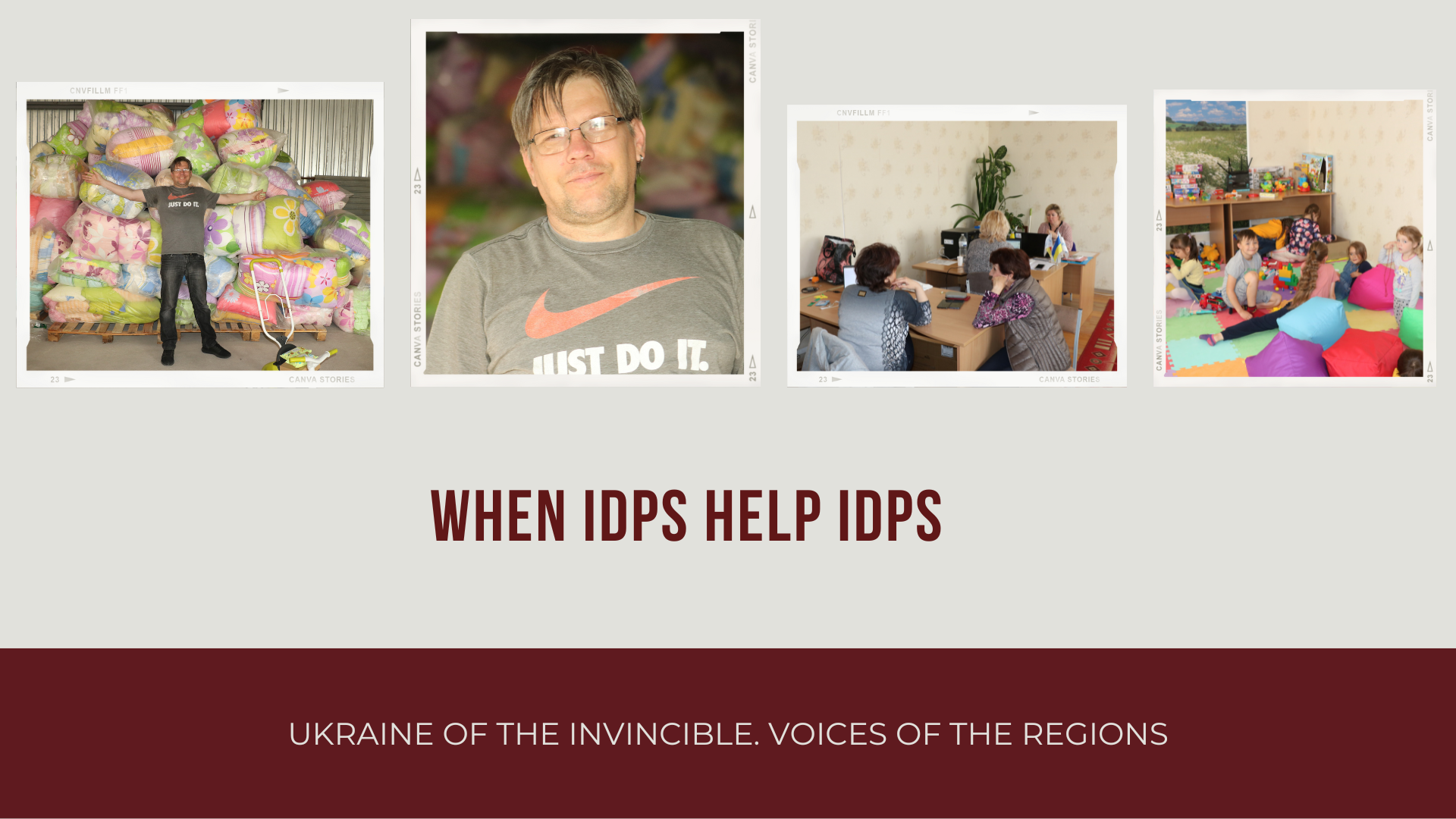 When they say that the traditions of Ukrainians’ self-organization is no-analog, these are not empty words. They originated in the days of the Cossacks, and have been carved like stones. The word “Volunteer” has in many cases become synonymous with the word “Trust”. There are many examples of this – in every corner of the country from Lviv to Kramatorsk

Before 2014, the activities of the Kramatorsk NGO “Community Development Foundation” fully corresponded to its name – activists were involved in various projects that had to promote community development. But after the beginning of the Russian aggression, the Foundation added a humanitarian sector, and created the Hands of Friends International Charitable Foundation. Together with international partners, it conducted humanitarian activities in the frontline areas of Donetsk and Luhansk regions. After February 24, the entire team was forced to leave Donetsk. The organization is now located in a small town of Bar in Vinnytsia region.

“Come on, I want to lie down on this mountain, and you’ll take a photo! Otherwise, it’s impossible to realize the size of this pile of pillows,” says Stanislav Chernohor, executive director of the Hands of Friends International Charitable Foundation.

We didn’t come for a photo session to a warehouse on the outskirts of the city, but rather not to waste time – Stanislav and some members of his team are going to carry humanitarian aid to the East. In Vinnytsia, they have loaded food from a partner humanitarian organization, and now they are loading hygiene products to take them to Kramatorsk.

“We’re also taking 100 sets of bed linen, pillows and blankets. We’ll unload it all in Dnipro at the temporary accommodation center which accepts refugees. The flow of people seems to decrease but bedding is needed – people spend a night or two there, so the bedding gets bad very quickly because of constant washing. Maybe friends from Dnipro will give something for  Donetsk region. Maybe it’s not big help in terms of volume, but we believe that every drop is important – everyone should do what they can, and then what will be will be,” says the volunteer.

The country suffers fuel shortage, and the cost of each trip of a truck is measured in tens of thousands of hryvnias, so they try to use transport as efficiently as possible.

Stanislav and his team arrived in Bar in mid-March. After active hostilities started, the issue of evacuating the charity foundation arose. When the Russian military began to move closer to the city with fighting, the team made their final decision to leave.

“We didn’t choose this small town by chance. We didn’t want to go to a big city – there is usually a hectic public life there, and wasting time on competition is unreasonable. We were looking for a small town with housing and warehouses on the one hand, and on the other, a place where we could be most useful and effective. Besides, there were people in Bar, who were happy to accept us – the local road college,” Chernohor explains. By the way, more than 20 employees of the foundation and members of their families have been accommodated in the college dormitory. In addition to them, there are also over 100 IDPs from different regions of Ukraine that suffer from hostilities.

The foundation’s staff do not call their relocation an evacuation, insisting on the wording “long-term business trip.” “Firstly, we are sure that we will return to Kramatorsk. And secondly, despite the war, we continue our activities not only in the city but also throughout Donetsk region – we constantly deliver humanitarian goods there and help the local population, we continue to take care of the elderly and people with hearing impairments. We just decided to expand the geography of our work and increase the number of people who receive support and help,” says Chernohor.

After 2014, the foundation, together with international organizations, has been actively involved in assisting IDPs and people who live along the line of contact. Apart from delivering humanitarian aid, the foundation opened a counseling center in Kramatorsk where IDPs can receive legal advice. “Most of the people who worked at the Center were forced to leave the occupied areas because of the war, so they understood the problems of IDPs very well and gave very practical tips. Therefore, when we were forced to leave Kramatorsk, those people became twice internally displaced,” says the head of the Foundation. For example, Eduard Malikov is a lawyer who is an IDP himself and has extensive experience in this field. Currently, he not only provides advice at the Foundation’s office, but also helps the city council organize work on accommodating internally displaced persons.

A city by history and character

In addition to humanitarian aid, the Foundation is also actively involved in developing local activities. According to project manager Olena Kostenko, on arriving in the city, the team began to establish cooperation with local authorities and organize activities not only for IDPs, but also for local residents. For example, in addition to the counseling center, a play area for children was created in the assembly hall of the dormitory. “Most of the toys were brought there by locals; some were bought at the expense of the organization. Now children can spend time with our volunteers,” Olena says. According to her, until recently it was very loud here, but residents of Kyiv and Kharkiv started to return home, so the number of the dormitory residents has decreased. Besides, the Foundation organizes film screenings for local children in the yard of the local school, and on Children’s Day, also makes a real holiday for kids. By the way, Olena has her own story of a double escape from the war. In 2013, she fulfilled her dream – to live in Crimea. After the annexation of Crimea and the liberation of Kramatorsk, she returned home. And after February 24 she had to change her place of residence again.

“Bar is a very ancient town with its history. Once there was a fortress here, but it was demolished, and in Soviet times even its foundation was destroyed and a park was laid out in its place. However, the town boasts many old buildings. Interestingly, there has always been a police station in this building, and a school in that one. Such stability, which began before the revolution, is rare. But the historic house, in which Mykhailo Kotsyubynskyi had lived for a long time, was not preserved. In Soviet times it was a warehouse of salt, and all the walls were damaged because of salt erosion. Experts say that it is no longer possible to restore this building,” says Olena on the way to the local clothes factory.

The Foundation has placed several orders for goods at this factory. First, they make bedding sets for group accommodation centers. And second, the Foundation ordered warm sports suits. “Very often people are evacuated from the combat zone without personal belongings, in home clothes and this warm soft suit should give a person a feeling of home comfort. This is very important for psychological rehabilitation. Our colleagues told us that when they meet people in a critical psychological condition, they very often just give them soap in a soap dish and a towel and send them to take a shower. Having received something in person, these people came out of the shower in a more stable condition,” Olena says, showing us soft and cozy clothes.

Flowers as a gift for hospitality

In the evening, in front of the dormitory, we meet two sisters – Svitlana and Olha. Together with college students they water the flower bed, which was planted in the first days after moving.

“These flowers are our desire to give something to the community, which welcomed us so heartily. Because we are already part of this community and we cannot just consume,” Svitlana Zabolotna says.

She, like most members of the Foundation’s team, was twice displaced – until 2014 she lived in Donetsk. With the outbreak of the war she moved to Kyiv, then changed several more cities, and in 2016, due to life circumstances, she found herself in Kramatorsk. That city was not strange to her, but it never became a real home.

“On February 24, I realized that I had no job, called a friend who worked at the Foundation and offered her my hands, head and help. At first I was just a volunteer, and when the Foundation decided to move, I chose to go with them. I didn’t have any expectations from the town. I liked it for its compactness and tidiness. But after big cities, it surprises me with complete absence of public transport,” Svitlana shares her observations.

According to her, she does not like eastern cities very much because they are continuations of enterprises and very often not adapted to ordinary life. In the cities of western Ukraine, the opposite is true.

“Probably, there is some difference between people, because it is people who create cleanness, beauty and atmosphere in the cities,” Svitlana sums up.