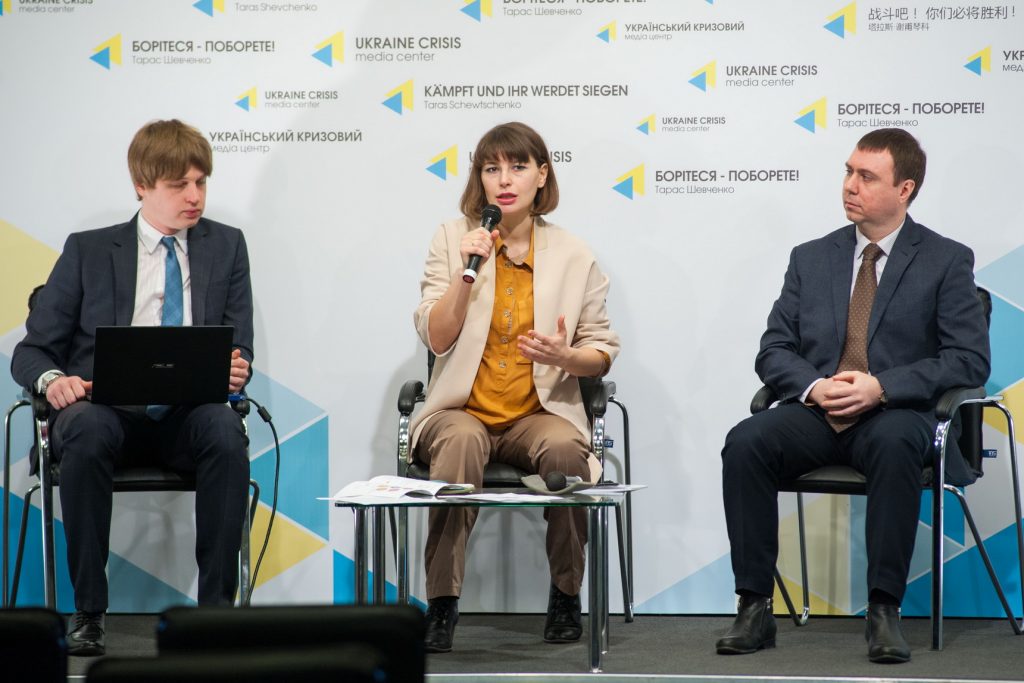 Kyiv, March 22, 2016. The register of “politically exposed persons” pep.org.ua is an online instrument for banks to monitor Ukrainian state officials’ financial operations. This was presented at a press briefing at Ukraine Crisis Media center today. “Our ultimate aim is complicating the lives of people laundering especially large sums of money and who intend to use this money to live luxuriously in EU countries or elsewhere,” said Daryna Kaleniuk, executive director of the Center for Combating Corruption. According to her, if a person is a prominent public official, which includes top officials, their close relatives and associates, a bank must ‘put a red tick’ marking them as a high risk client. The bank automatically enquires of the sources of these funds. “Should there be the slightest suspicion that these funds might be linked to corruption or any other criminal origin, this will be a reason to notify financial intelligence and law enforcement agencies on signs of money laundering,” she emphasized.

According to Kaleniuk, banks could previously avoid these responsibilities, for there was no database of public officials. The new bilingual register of Ukrainian public officials in English and Ukrainian has been created for this purpose. First of all, it is intended for the foreign audience and foreign financial institutions, but at the same time it is an instrument for Ukrainian banks. “We systematized information from public agencies, state companies, judicial institutions and prosecutors’ offices regarding the definition of a public official through MPs’ inquiries and information requests,” explained the director of  the Center for Combating Corruption. She said systematization of all the public information on officials from the highest risk group would be the next step. All facts about such people are publicly accessible, and this database only structures them. The more information is available, the more useful the system will be. As a result, banks and financial institutions will be able to identify more risks,” emphasized Kaleniuk.

According to Ihor Haievskyi, representative of the State Service for Financial Monitoring of Ukraine, the task of this service as a subdivision of the financial intelligence service is collecting, processing and analyzing information on suspicious financial transactions. He said that banks must identify any public official, specify information regarding such a client and find sources of the funds used in any financial operation. This is why a bank needs to know whether a person is a public official. “This database has many benefits. It contains systematized information on national public officials and it is free. Moreover, what is the most important both for us as a financial intelligence subdivision and all the other subjects, it shows not only the profile of a public official, but also his possible business and personal connections,” said  Haievskyi. According to Andriy Shuran, analyst of the register and an expert on banking control, there is a beta-version of the website functioning at the moment and information is being added all the time. “Official responses make up 70% and 15-20% is data from official websites of public authorities,” said Shuran speaking of content of the website. He said that there are more than 10 variants of English spelling for every official in the database. The website contains basic profiles of public officials with surnames, names, patronymic, position and career information. There are also extended profiles containing “connection trees” of such people, their declarations etc. “There are about 2.5 thousand judges, starting with High administrative court to regional courts of appeal, over one thousand heads of state enterprises, civil servants of 1st and 2nd category – up to 500 people, chiefs of various law enforcement agencies, prosecutors, police officers, Ambassadors (about 70), heads and members of political parties (230) and members of parliament of the two latest convocations,” elaborated Shuran. There are declarations for 3000 public officials. Another 5 thousand declarations will be checked in the nearest future, added the analyst. “We possess information regarding more than 10 800 public officials at present,” summarized the banking control expert.

Kaleniuk added that website searches can be based not only by person, but by a legal entity or a country where public officials could establish companies or purchase real estate property.