In Donetsk sector the situation was somewhat less intense that the day before. “Militants used no armor, used only grenade launchers and machine guns.  They used mortars only in Avdiivka,” informed Ukrainian Ministry of Defense spokesman on ATO Colonel Oleksandr Motuzyanyk at a press briefing at Ukraine Crisis Media Center. Most of the hostile attacks took place in Avdiivka. Militants were shooting regardless of the time of the day. Russian proxies remain active in Horlivka perimeter. Militants were actively attacking Zaitseve with light weapons.  “Both residential buildings and household infrastructure came under fire. The buildings are seriously damaged, and some are ruined to the ground,” said the spokesman. Moreover, last night militants violated the ceasefire twice in Novoselivka Druha, both times after the sunset. “The first attack continued around two hours. Militants used from grenade launchers and machine guns,” added Col. Motuzyanyk. 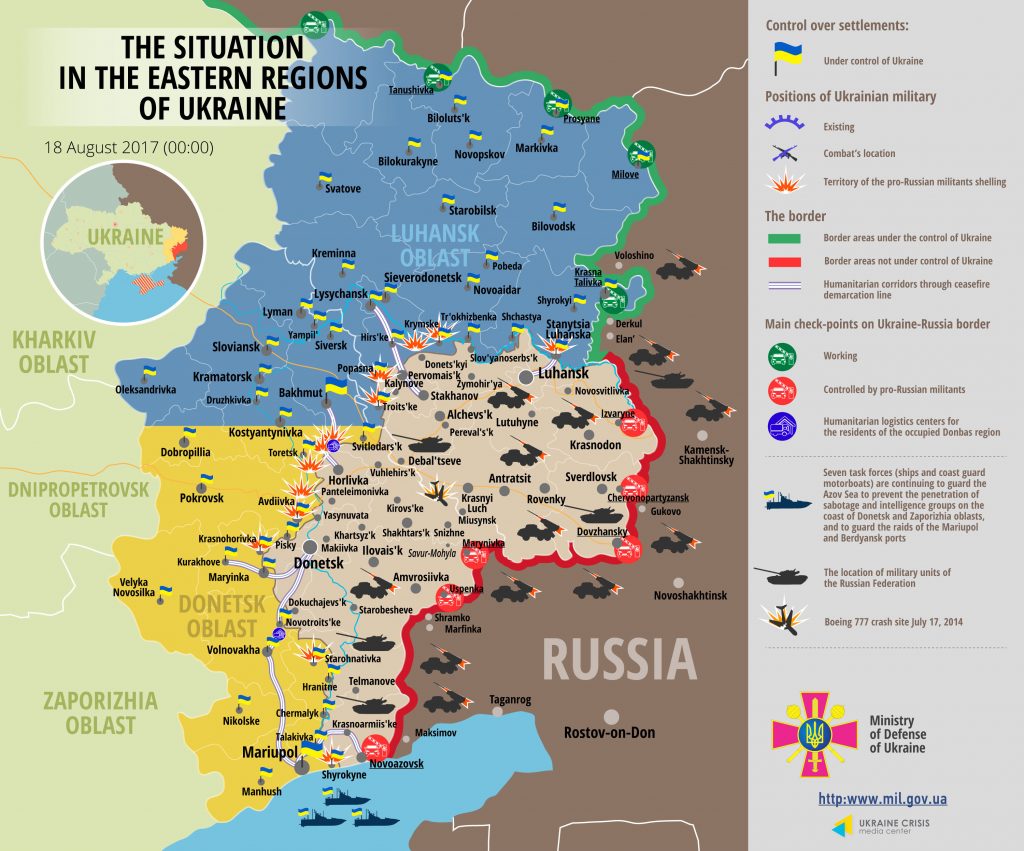 In Mariupol sector militants violated the ceasefire three times, attacking Krasnohorivka, Starohnativka, and Shyrokyne.  “The most intense attack was recorded in Starohnativka in the afternoon, where the enemy conducted an hour-long heavy weapon attack. They fired 10 artillery, six tank and four mortar rounds at our strongholds,” said the spokesman. Militants also used heavy weapons in Shyrokyne. They shelled Ukrainian positions with mortars at the sunset. In Krasnohorivka Russian proxies were shooting at Ukrainian positions with small arms during 30 minutes.

“In Luhansk sector, main hostilities traditionally took place in Popasna district and along the Bakhmut road,” said Col. Motuzyanyk. Novooleksandrivka and Troitske remain the flashpoints in Popasna district. Militants were shooting at Ukrainian positions with light weapons during the day. In the Bakhmut road, Russian proxies violated the ceasefire in Novotoshkivske and Krymske. The latter suffered four attacks. “Militants conducted a mortar attack at our strongholds there around 16:00,” added the spokesman. In total, nine hostile attacks occurred in Luhansk sector in the afternoon.

No Ukrainian serviceman was killed in action, but two troops were wounded yesterday.

Report on the military developments as of August 17 is available here. Interactive data on the shelling: chronology shelling chart and the interactive map.