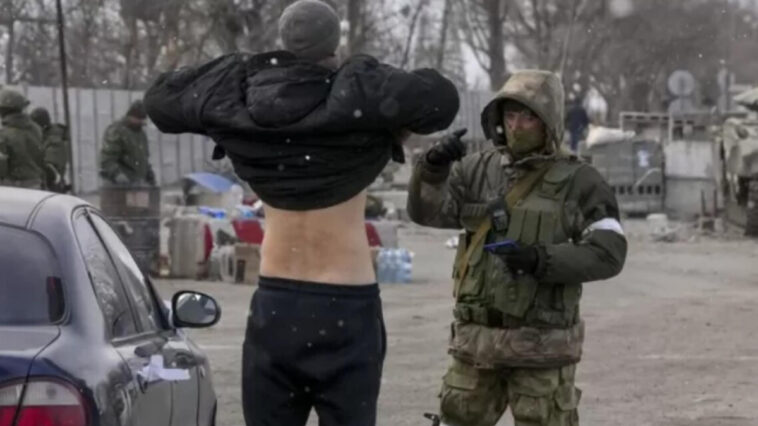 “Filtration” camps in the villages of Bezimenne and Kozatske are a real concentration camp and torture chamber modeled on the Nazi regime.

Commissioner for Human Rights Liudmyla Denisova: During the last month, the occupiers forcibly removed all men from certain districts of Mariupol for the so-called “filtration”.  About two thousand people were placed in the villages of Bezimenne and Kozatske in the Novoazovsk district.

No personal belongings were allowed to be taken, passports and other documents were confiscated for identification.

The men were placed in the school and club.  It is impossible to leave them without a convoy of rashist soldiers.

Conditions of detention are terrible, people are forced to sleep on the floor in the corridors.  No medical care is provided.

The first case of tuberculosis has already appeared at the school in Bezymennoye, which is why the occupiers have turned the gym into a detention center where a large number of people are being held.

A man died in a camp in the village of Kozatske due to the occupiers’ refusal to call an ambulance.

As food, people are given a balanda, which is not very suitable for consumption.

One sink with cold water for thousands of people is available for hygienic procedures.  Under such conditions, the incidence among detainees increases.

Men are beaten and tortured for the slightest disobedience.

The men received a filtering paper, but it did not entitle them to leave the camp.  Instead, detainees, including the sick and people with disabilities, are being recruited to work on landscaping in the village of Bezymyane and the city of Novoazovsk under the escort of the russian military.

This week it was announced to our citizens that they will take part in the “parade” on May 9 in Mariupol as “prisoners”.

Why they will be dressed in the uniform of Ukrainian soldiers.

For the most part, only women and occupiers remained in the city of Mariupol.

Homes of Mariupol residents are ruthlessly looted by rashists.  Women try to hide so as not to be raped or killed.

Russia’s actions in Mariupol are genocide of the Ukrainian people in accordance with the Convention on the Prevention and Punishment of the Crime of Genocide and Article 6 of the Rome Statute of the International Criminal Court.