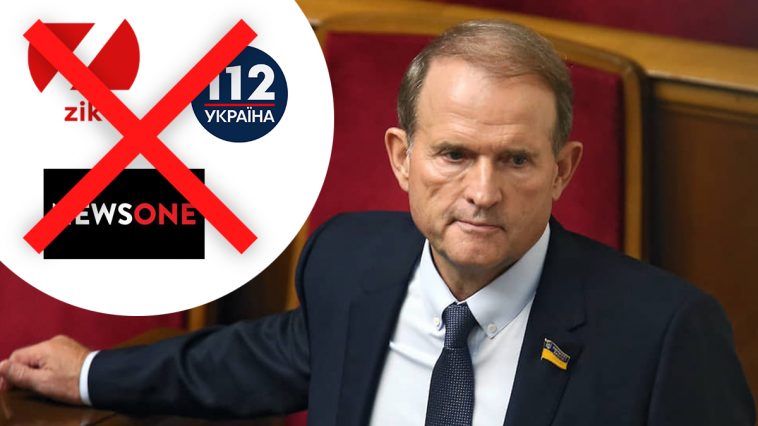 President Zelensky signed the decree by the National Security and Defense Council of Ukraine (NSDC), which imposes sanctions on Taras Kozak, an MP and a member of the pro-Russian party “Opposition Platform – For Life” (OPFL). Kozak is a close ally to Viktor Medvedchuk – and a formal owner of a significant part of his media-empire, specifically 112, ZIK and Newsone channels. Presidential Office named financing from the Russian Federation as one of reasons for the decision. These channels, along with several others such as “Nash” and “Inter”, linked to other oligarchs and pro-Russian politicians, have been for years promoting Kremlin’s disinformation in Ukraine and were labeled by experts as a major threat towards information security. With only 6% of Ukrainian using Russian TV as a primary source of news, the role of local media proxies grew dramatically, and their work may be considered quite successful. In particular, 45% of Ukrainian population believes that the country is under “external governance” – a key narrative, which has been pushed by Medvedchuk and his allies most aggressively. In this regard, the government’s attempt to limit malign information influence may be considered a positive course of action:

Pro-Russian politicians have, predictably, already expressed their explicit disagreement with the decision, framing it as an attack on the freedom of speech. Vadym Rabinovych, an MP from OPFL, has already announced the party will initiate the impeachment procedure, once more labeling the Ukrainian government as “fascist”. Most activity may be observed in Telegram. Not only official channels, such as the ones belonging to Anatolii Sharii and Andriy Portnov, the former Deputy Head of Presidential Administration under pro-Russian ex-President Yanukovych, but also the anonymous ones, amplify the message of setting a dangerous precedent and turning Ukraine into “dictatorship”. Russian online-media and Telegram have already picked the story with the same framing – but the immediate response from Russia and potential pressure from the Kremlin to protect its assets is likely to be delayed. Ukrainian government seems to have picked a right moment for implementing this decision, with Moscow being focused on internal protests, arrests of anti-corruption activist Alexey Navalny and the Western response to the local repressions.

Nevertheless, it is vitally important for NSDC along with the law enforcement to have anticipated this reaction and have gathered a substantial amount of evidence, especially regarding the funding from Russia and the possible financial ties to the illegal export of coal from the occupied territories of eastern Ukraine Medvedchuk is suspected in. There is hope that the state will be able to implement this decision in a sustainable manner, as, for example, Kozak could simply sell these channels to another pro-Russian actor, as the sanctions are tied to him personally. This tie may also be revoked by the court; especially given the dramatic situation Ukraine’s judicial reform is in, where courts have repeatedly acted in the personal interests of politicians and oligarchs. The decision also does not deal with the initial source of the problem, leaving Medvedchuk an opportunity to create and/or purchase other media, while also increasing the use of other resources he has, his wife’s share at 1+1 as a most popular Ukrainian channel in particular. The issue of oligarchization in the field needs to be tackled separately and on a systemic level.

It is also crucial for Ukrainian government to communicate this step in a transparent, swift and coordinated manner, presenting all the evidence, to avoid the crisis of trust. Explanatory effort is equally important both for the domestic audience and Ukraine’s foreign partners, who may be out of the context.