In Luhansk sector, Russia-backed militants conducted 10 ceasefire violation yesterday. The hostilities took place in Popasna district and along Bakhmut road. Militants shelled Ukrainian positions near Troitske and Novooleksandrivka before the daylight and after 09:00. Russian proxies fired five mortar rounds at Troitske in the evening. “Krymske was a flashpoint in Bakhmut road yesterday. In total, Russian proxies violated the ceasefire three times here, but the attacks were shorter than the ones near Popasna. The enemy was shooting from mortars in Krymske,” informed Ukrainian Ministry of Defense spokesman on ATO Colonel Oleksandr Motuzyanyk at a press briefing at Ukraine Crisis Media Center. 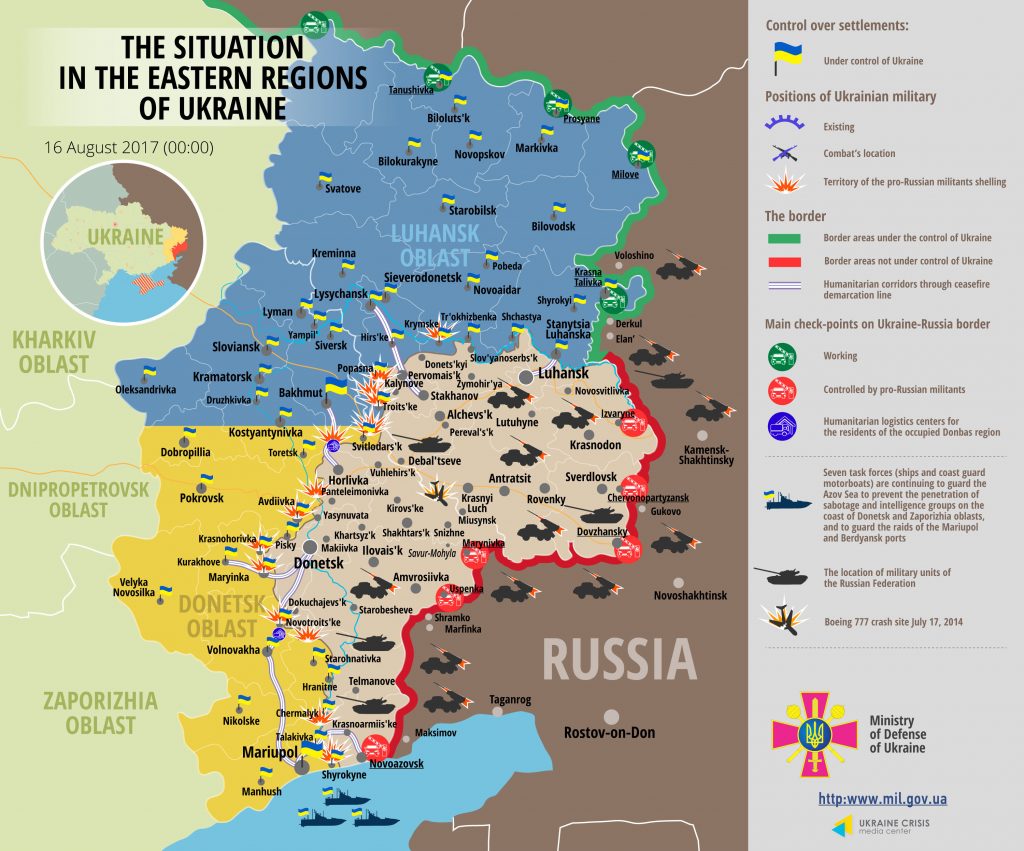 In Donetsk sector, militants were attacking Verkhniotoretske with small arms in the morning. Another, more intense attack was recorded there in the afternoon. “This attack continued two hours during which militants fired 15 mortar rounds and actively used grenade launchers and large caliber machine guns,” said Col. Motuzyanyk. Russian proxies also attacked Ukrainian positions in Zaitseve and near Svitlodarsk, where they used mortars. Four hostile attacks were recorded in Avdiivka. They continued for over four hours in total. A total of nine militants’ attacks took place in Donetsk sector yesterday.

In Mariupol sector, militants attacked Maryinka and mortared Krasnohorivka. “The enemy was active only in the afternoon near Dokuchaievsk.  They attacked ATO troops in Novotroitske and Bohdanivka using mortars in both cases,” said Col. Motuzyanyk. In the southern area of the sector, attacks took place in Pavlopil and Vodiane. Militants fired over 30 mortar rounds and four Grad-Partizan missiles in four shellings of Pavlopil. In total, Ukrainian troops recorded 14 hostile attacks in Mariupol sector.

No Ukrainian serviceman was killed in action yesterday, but four troops were wounded. One of them tripped an improvised explosive device.

Report on the military developments as of August 15 is available here. Interactive data on the shelling: chronology shelling chart and the interactive map.