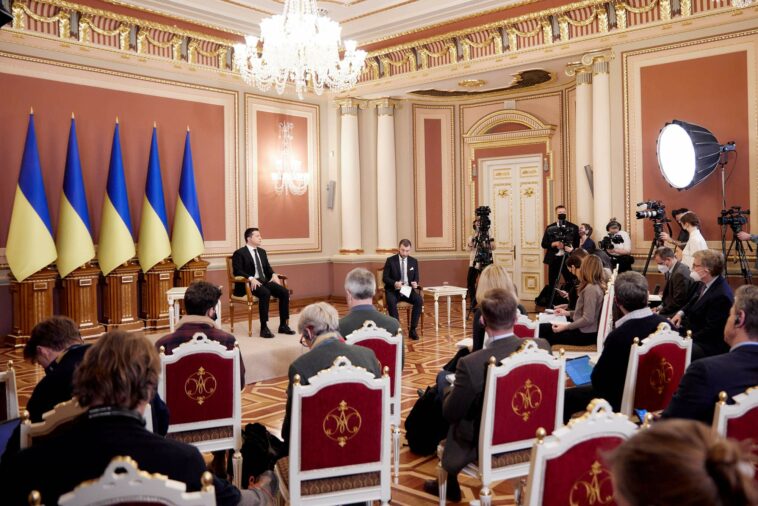 Russia-backed militants continue to ignore ceasefire agreements, after all sides reaffirmed commitment to ceasefire in Paris on January 27, 2022. On January 30, Russia’s proxies made two attacks. There were similar attacks throughout last week.

On Friday January 28, President Zelenskyi held a news conference for the foreign media in Kyiv. He spoke of a threat of Russia’s renewed aggression and a response by the West.

Zelenskyi called on the West to refrain from “overreacting” and making warnings of a full-scale war so as not to create panic. Reports of an imminent attack by Russia have cost the Ukrainian economy USD 12.5 billion, the President said. He underscored the importance of investing in Ukraine’s economy to prevent a crisis. Here are the highlights from the news conference.

“I know deeper details”. The foreign reporters asked if the presidents of Ukraine and the U.S. disagree over how to interpret Russia’s buildup near Ukraine border. Zelenskyi denied they had any misunderstandings with Biden, and said he deeply understands what’s going on in his country. “I know deeper details than any president. It’s not about the U.S. President. We know which risks are highest priority,” he said.

A level of threat of Russia’s invasion of Ukraine has not changed from before, Zelenskyi said. “Satellite imagery shows a buildup of troops, but the imagery alone is not sufficient to assess if the troops are there to intimidate, attack or rotate. Our professionals assess the situation deeper. Sometimes we see tents installed to show that there are several brigades on the border, and then we see that those tents are empty and the people were taken away. That’s a narrative of intimidation by Russia and the separatists.”

“We need to stabilize the economy as the signals have come even from respected world leaders, who speak openly and with undiplomatic language. They say: ‘tomorrow there will be war’. Panic gripped the markets. Does it cost us a lot? Last year, Ukraine’s GDP reached an all-time high, and investment reached USD 6.5 billion. As the news spread, investors withdrew USD 12.5 billion from Ukraine. Our reserves are the biggest in the past 10 years. You have to understand that our country cannot confront those challenges alone. We tapped the reserve to stabilize the currency. It comes at high cost to Ukraine.”

“In a standoff with a difficult state, why do we need sanctions afterwards? Are they designed to help Ukraine? No. I don’t know what’s coming next. If there’s a full-scale war tomorrow, why do we need sanctions afterwards? These sanctions are not designed to help our country, this is to stop full-fledged aggression towards the European Union. It should be done at our cost. I don’t think it’s fair.”

“Why would an experienced person suggest something that would result in nothing? Don’t they have anything to do? Do they not care about the casualties on the border? That’s highly cynical. How can I not mention Donbas? The whole world is talking about it, as the Ukrainian President I care.”

“I’m not afraid of any format of the meeting bilateral, OK, I’m ready. Do they invite me to Sochi to ski? Let’s meet then in Odesa to swim in the sea. It has to be serious. People don’t understand the value of the human life and that’s what it’s about.”

“Time goes by, and the (Russian) minister is not young. New generations are next in line. It’s time for us to agree.”

“If Russia says it supports the Minsk agreements and has no intention of attacking Ukraine, it has to prove its words with actions. Why so many troops? Why the drills are so frequent? Russia says it has a massive well-trained army. Why do they train on the border? That’s dangerous, there is a risk of provocations, and the risks are high. Why do they do it? To intimidate us? Is that masochism? Does that please them?”

How Russia distorts reality in act of war

As Russia builds up troops on Ukraine’s border, tensions grip the West

Two Ukrainian films received prizes at the Sundance Film Festival in the U.S.

Maryna Er Gorbach received the Directing Award for “Klondike” that was part of the World Cinema Dramatic Competition. The story unfolds against a backdrop of the early days of the war in Donbas and downing of flight MH17. Irka and Tolik live in Hrabove, in Ukraine’s Donetsk region, and expect their first child. Here’s what we wrote about the film. The award also comes as a chance to shed light on people’s lives amid the war in Ukraine, Er Gorbach said.

Simon Lereng Wilmont received the Directing Award for “A House Made of Splinters” that was part of the World Cinema Documentary Competition. The film narrates the efforts of social workers in eastern Ukraine to create a cozy space for kids in an orphanage.

In Ukraine, the coronavirus outbreak worsens as the Omicron variant is picking up speed. On January 30, Ukraine recorded 22,026 cases, and 78 deaths. Hospitalized were 2,322 people with suspected or confirmed Covid-19. Last week, daily cases neared 40,000. On weekends, the daily average of new cases drops.